Denis Winston Healey, erstwhile Labour politician, who once served in the highest offices of state as Defence Secretay 1964 to 1970 and Chancellor of the Exchequer from 1974 to 1979, is 95 years old today.

What you possibly didn't know about Denis, that he :


* he was born Mottingham, London one year before the end of the First World War in 1917 and moved with his family to Keighly in the West Riding of Yorkshire when he was five, where his father was an engineer who worked his way up from humble origins studying at night school.

* at Bradford Grammar School in 1936, after first class exam results, won an 'exhibition place' or financial award to attend Balliol College at Oxford University to read 'Greats'  with its strong emphasis on first hand study of primary sources in the original Greek or Latin.

* as a student joined the Communist Party in 1937 but left in 1940 the year in which he gained a 'double first' for his degree.

* served in the Second World War with the Royal Engineers in the North African Campaign, the Allied invasion of Sicily and the Italian Campaign and was the military landing officer for the British assault brigade at Anzio and left the Army at the age of 28 with the rank of 'major' having declined an offer to remain as a 'lieutenant - colonel'.

* joined the Labour Party and still in uniform, gave a strongly left-wing speech to the Party conference in 1945 and was elected to the House of Commons as Member of Parliament for Leeds East February 1952.

* when Labour won the 1964 Election Healey, served as Defence Secretary and cut defence expenditure, cancelled the TSR2 aircraft and withdrew troops from East of Suez commitments.

* became Chancellor of the Exchequer in 1974 ( right ) after Labour's narrow election victory and produced a first budget which was strongly progressive, with increases in food subsidies, pensions and other benefits. 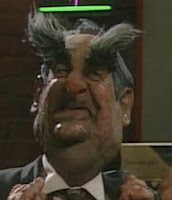 * had his bushy eyebrows , highlighted in the tv satire programme 'Spitting Image' and found that his soft-spoken wit earned him a favourable reputation with the public in one example in 1978, he likened being attacked by the mild-mannered Sir Geoffrey Howe in the House of Commons to being "savaged by a dead sheep".

* In an interview this year, said that he was swimming twenty lengths a day in his outdoor pool and was missing his late wife "very much indeed" and discussed this with 87 year old Tony Benn earlier this year.
http://www.youtube.com/watch?v=gn_Ie59McKU

* was interviewed when he was 89 years old : http://www.youtube.com/watch?v=3jon0i27UWg 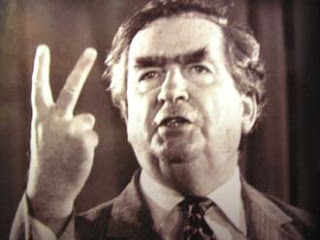