An article in 'The Gaurdian' last week was entitled :

King's Fund Think tank finds those with no qualifications are five times more likely to smoke, drink, and neglect diet and exercise and  England's richest citizens live seven years longer on average than the less well-off. 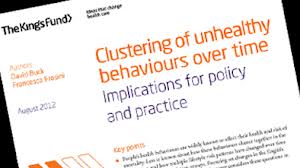 Apparently, the stark social class divide in health is widening as the better-off old men and women increasingly shun damaging habits such as smoking and eating badly but the poorer ones do not.
The number of people in England who risk their health by engaging in 'multiple lifestyle behaviours' such as smoking, drinking too much and physical inactivity is falling, according to a study by the influential King's Fund Health Think tank.

However, it is middle-class people who are driving the trend, while the most disadvantaged remain stuck in a cycle of risky behaviour which increases their chances of developing a range of serious illnesses and will put 'unavoidable pressure' on an already hard-pressed National Health Service.

The authors found that the better off someone was, the more likely they were to have begun living a healthier life during 2003-08, a period when the Government funded a host of often dramatic awareness campaigns aimed at changing attitudes to smoking, reducing harmful drinking and tackling obesity. 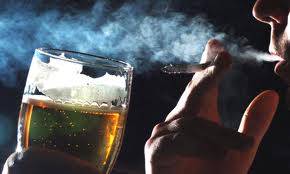