An article in 'The Guardian' last month was entitled :

Refused access: fighting for the right to travel on the buses

It told the story of 76 year old Ray Bellisario,  disabled and a wheelchair use who has started a campaign after being told 28 times he could not board buses in London and made the following points, that he :

*  had been a regular traveller on London buses, visiting family and friends, going shopping and making many trips to hospital and knew that getting on a bus with a wheelchair involved the driver lowering a ramp at the rear door.

* had his first experience of being refused access  when the driver refused to lower the ramp, said :"You have a motor on your wheelchair", took a photograph of Ray in the wheelchair, then drove away.

* was "utterly amazed" when the next bus driver, claiming he was following 'red book' instructions, didn't allow him on board saying: "I daren't take the risk; another driver might and according to him, new instructions had been given a couple of months earlier."

*  complained to by letter to and was ignored by : the Mayor of London, Boris Johnson, as 'Head of Transport for London', Maria Miller, the 'Minister for Disabled People' and the bus operator.

* a week later, repeating his journey to hospital, found that another driver said : "Your wheelchair is not allowed on the bus"  and this time, put his foot in the doorway and told the bus driver in 'Rosa Parks-style' that, if he was refused, "the bus wasn't going anywhere."

* despite his apologies, some of the now-delayed passengers rounded on him, forced the driver to call his controller who told the driver he must allow him on to the bus but on lowering the ramp the driver found it was jammed and had to take the bus out of service and the passengers had to get off with some becoming angry with him saying : "It's all your f....... fault, you've made everyone f...... late."

* found his next hospital appointment brought worse 'driver trouble' when, before even reaching the stop, the driver  waved at him in dismissive fashion and opened the doors to shout,  that he "was not getting on".

* when he put his foot in the door to stop it closing, the driver got out of his seat and repeatedly stamped on his foot and kicked him in the shin, while operating the doors to trap his ankle while horrified passengers shouted at him to stop and finally, pulled the doors open with his hands,  kicked Ray's foot off the step and drove away. 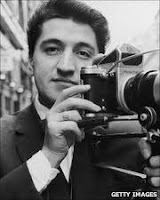 * was, on 28 separate occasions over the last 18 months, and has set up the 'Ray on Rights Campaign' and is taking the bus companies involved and the 'Minister for Disabled People' to court for breaching the Equality Act of 2010 law which obliges those who provides a service to the public to take reasonable steps to adjust their services for disabled people and prohibits discrimination against disabled people.

P.S.
Ray is an old man who deserves to be taken seriously and is not intimidated easily and he certainly isn't scared of authority. In his youth he was the first modern day paparazzo who shadowed and photographed the Queen and her family from 1955 onwards and whose activities prompted Prince Philip to suggest he should be imprisoned in the Tower of London. His book, 'To Tread on Royal Toes' , illustrated just how much he relishes a fight with the Establishment and he doesn't give up