Britain is no longer a country for and says "Goodbye" to a fearless old Scots, documentary film maker called Brian Barr

Brian Barr, who has died aged 70, was physically fearless, whether scrabbling up rock faces in the Scottish Highlands or filming in war zones and fearless as a journalist in pursuit of the truth.

* was born in Paisley, Scotland and attended Paisley Grammar School where he took up playing the oboe with the encouragement of his father, James, who was  Musical Director of the Glasgow Corporation and saw the high point of his oboe career  when he gave a tv performance of 'Holst’s Oboe Concerto' with the BBC Scottish Orchestra.

* left school and gained degrees in law and philosophy at Glasgow University, but was pointed towards his later career when his philosophy professor marked one of his essays with the comment: 'Mr Barr, I'm inclined to give this work a Gamma for content but an Alpha for style. Have you ever considered journalism?'

* started work in the incubator of Scottish journalists, the 'Sunday Post' in Dundee, progressed to the role of leader writer at the 'Glasgow Herald' in his twenties in the early 1970s, before leaving to edit a community newspaper, the 'Glasgow News'.

* in 1975, joined 'BBC Scotland' as a reporter on the weekly documentary series, 'Current Account' and in film, explored  'asbestosis in Clyde shipyards' and 'lead in Glasgow's water supply.'

* produced films in the 'Secret Society' Series about :
- cabinet committees in 'The Secret Constitution'
- data banks in 'We're All Data Now'
http://www.youtube.com/watch?v=2onUnMbe3jk&list=PLi77nHBEunGTUgJFPfU0CIgNJYvJ7Sh8C&index=15
- government emergency powers in  'In Time of Crisis'
- botched radar contracts.in 'A Gap in Our Defences' http://vimeo.com/48987753

* in the 1990s, filming for the Channel 4 series 'Secret Places' at RAF Chicksands in Bedfordshire, was by turn : apprehended by armed US soldiers and then detained by police for 12 hours; arrested by the Israel Defence Forces; incarcerated by police in Algeria and nearly shot for trying to attach a microphone to Yasser Arafat in Palestine.

* in 1986, helped reveal one of Britain's greatest post Second World War security scandals, when he and investigative journalist, Duncan Campbell (left), exposed the existence of a £500m spy satellite programme, 'Project Zircon', which the Government had omitted to mention to Parliament.

* triggered the Special Branch night raid on the Glasgow Headquarters of BBC Scotland and seizure all film related to the programme, which ignited one of the most explosive confrontations between the Thatcher Government and the BBC and played a major role in the resignation of the Director General, Alasdair Milne in 1987.

* saw the film about Zircon screened by the BBC in 1988 after a Government injunction preventing transmission of the film was circumvented by unauthorised screenings by anti-censorship campaigners and loved to quote the headline about him from the Paisley Daily Express : 'Ex-Paisley choirboy in spy scandal'.

* found it increasingly difficult to get commissions in his later years, but co-wrote a book about River Spey with his brother Donald and made community films in the Scotland's, Isle of Bute where he lived including one about North Bute Primary School in 2011: http://www.youtube.com/watch?v=_yY1yqwOPf0

* joined the Bute Writers' Group and said of himself :
'Unpublished work: Chapter 9 of an untitled novel. Sadly, chapters 1-8 and 10-16 remain unwritten because I’ve no idea who the characters are, what they are supposed to be doing, or what happened before and after the events of chapter 9. Which I think is a clue to my problem with fiction viz an underpowered narrative imagination. Joining the Writers’ Group will, of course, solve my problem.' 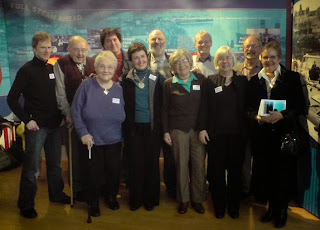