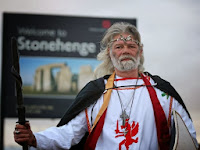 King Arthur, the Battle Chieftain of the Council of British Druid Orders, who was born John Timothy Rothwell, is 59 years old and changed his name by deed poll 27 years ago after a friend told him he embodied the spirit of the legendary king. He is not a happy King. The cause of his unhappiness being the decision of English Heritage to give public display to locally excavated 5,000 year old Stonehenge human remains inside its new visitor centre.
He said :
"English Heritage's argument is that it's all about the history of Stonehenge. Well, kings and queens of England are all about the history but they are not digging them up and putting them on display, or ex-prime ministers, are they?
There needs to be a change in the law. Pre-Christian human remains can be put in display, but ones afterwards cannot. Our ancient ancestors should have the same protection under law."

The King is also a critic of the policies of the Cameron Government :
http://www.youtube.com/watch?v=q5j8P4bnfBg 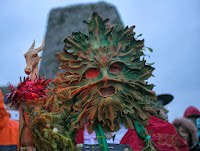 Druids, pagans and revellers gathered in the centre of Stonehenge, hoping to see the sun rise, as they took part in a winter solstice ceremony a few days ago on December 21. Despite the rain and wind, they celebrated the sunrise closest to the Winter Solstice, the shortest day of the year, an event claimed to be more important in the pagan calendar than the summer solstice, because it marks the ‘re-birth’ of the Sun for the New Year.

King Arthur was there on the edge of the site to lead a boycott protest with his Loyal Arthurian Warband Group :
http://www.youtube.com/watch?v=KFz36skqnAQ&feature=youtube_gdata 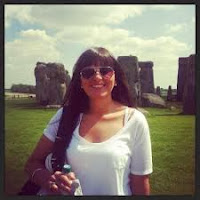 According to Stonehenge General Manager, Kate Davies, arrangements for Winter Solstice this year were similar to previous years, with English Heritage working to ensure a "safe and happy" occasion. King Arthur, however, was highly critical :
"The Winter Solstice was incredibly over-managed this year. The situation with parking was awful and everyone was herded like sheep. People were asked to leave before midday, when in previous years they have stayed at the solstice until well after 5pm. I got the impression that English Heritage wanted worshippers out of there as quickly as possible because they thought they got in the way of tourists. I'm sad to say that it was an utter shambles."

The King has taken issue with the display of this prehistoric Briton's skull which has been used to produce the most life-like, and arguably the most accurate, reconstruction of a specific individual's face from British prehistory. He wants his bones to be reinterred.

English Heritage has said that it : ' believes that authenticity is important to tell England’s story. We only use replicas when the real item is not available. Research shows that the vast majority of museum visitors are comfortable with, and often expect to see, human remains as part of displays. Stonehenge is the focus of a ceremonial and ritual landscape shaped over 1,500 years. The exhibition puts at its centre the people associated with it and as such, the remains have a rightful place in the exhibition.'

King Arthur, however, has said : “If English Heritage thinks I’m going to go quietly into the night then they’re mistaken. They’ve picked on the wrong druid.” 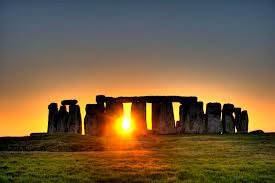