David, who has died at the age of 87 elicited these tributes :
http://www.youtube.com/watch?v=sFEOGovPRm4

* was born in 1926 in Alderley Edge, Cheshire, the son of parents from County Cork, Ireland and after attending the local grammar school, worked as a trainee journalist on his local 'Stockport Express' before stating two years National Service in the Army 1948 with its newspaper unit, with postings to West Germany and East Africa.

*  came to sport as a gifted amateur runner and at 23 in 1949, won the annual 'Manchester Mile', but three years later, injuries prevented him from entering trials for the 1952 British Olympic team and in 1954 joined the BBC in Birmingham, concentrating on sport in the Midlands after a stint as editor of the weekly 'Cheshire County Press' and writing scripts for the BBC's Manchester newsroom.

* got his break at the age of 28 in 1954 with a 'fill in' interview with the popular Argentinian golfer Roberto de Vicenzo and was handed the reins of the BBC's main sports programme, 'Grandstand' by Peter Dimmock (left) who said he was "20 times better at it than me".

* in the studio or on location, proved unflappable at taking a producer's direction, in spite of the din either all around him or through his earpiece and delivered his race-reading of successive Olympic 100 metres finals, from Rome in 1960 to Sydney in 2000, with spot-on identification of eight men tearing headlong at him in a less than 10-second blur. 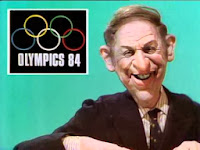 * proved to be his most resplendent as a journalist in 1972, working from one, distant, fixed camera, throughout the day of the murders of 11 Israeli athletes at the Munich Olympic Village..

*   was irritated him to the point of anger in the 1970s by the fortnightly log of commentators' gaffes and tautologies published in the satirical magazine, 'Private Eye' called 'Colemanballs' , but had mellowed by the time tvs 'Spitting Image' in the 1980s http://www.youtube.com/watch?v=liJAnl7I09E
and he could laugh at himself as a crazed, check-capped puppet, finger in earpeiece, squealing: "Er, reallyquiteremarkable and, er, I'vegonetooearlyand Ithinkit'simpossdibletokeep upthislevelofexcitement withoutmyheadexploding…" 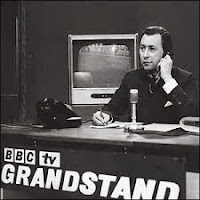 * fronted 'Grandstand' for a decade, moved to a midweek slot with 'Sportsnight' for five years from 1968, was the BBC's senior football commentator in the 70s and from the early 80s concentrated on athletics and in addition, brought his  businesslike geniality to chairing 'A Question of Sport' for eighteen years from 1979.

* at the age of 74, following his final Olympiad at Sydney in 2000 at a ceremony at the International Olympic Committee's base in Lausanne, Switzerland, had the IOC president, Juan Antonio Samaranch pin to his lapel the rare Olympic Order medal, the first broadcaster or journalist to be so honoured.

Brian Moore, his rival at  ITV :
"All round the world, David offered no real friendship. He was so spiky. If he even said 'hello', it was more with a sneer than a smile. But while his temper was short, his standards were immensely high. His hard edge made him as formidable a journalist as he was an opponent. He knew he was the best and professionally, all said and done, we knew he had set the standard and there was simply nothing we could do but admire and respect his talent."

Brendan Foster, his fellow commentator and former Olympic 10,000 metres bronze medallist :
"David enriched so many lives and that was down to his brilliant commentary and presentation at all the major sporting events of the world. In my view everybody had a David Coleman quote they could use. It could have been about Pele, Charlton, Toshack or Keegan, or just 'one-nil'.

With numbers and quantities :

“He is accelerating all the time. The last lap was run in 64 seconds and the one before that in 62.”

“Nobody has ever won the title twice before. He (Roger Black) has already done that.”

"It’s gold or nothing ... and it’s nothing. He comes away with the silver medal.”

"We estimate, and this isn't an estimation, that Greta Waltz is 80 seconds behind."

“The front wheel crosses the finish line, closely followed by the back wheel.”

“If that had gone in, it would have been a goal.”

“This evening is a very different evening from the morning we had this morning.”

“Both of the Villa scorers – Withe and Mortimer – were born in Liverpool as was the Villa manager Ron Saunders who was born in Birkenhead.”

"And the line-up for the final of the women's 400 metres hurdles includes three Russians, two East Germans, a Pole, a Swede and a Frenchman."

“In a moment we hope to see the pole vault over the satellite.”

“He just can’t believe what’s not happening to him.”

“I think there is no doubt, she’ll probably qualify for the final.”

“Don’t tell those coming in the final result of that fantastic match, but let’s just have another look at Italy’s winning goal.”