Britain is no longer a country for and says "Goodbye" to an old businessman, turned late-in-life novelist, called Paul Torday

Paul, a businessman who found fame as novelist late in life has died at the age of 67.

What you possibly didn't know about Paul, that he :

* was born in Croxdale, County Durham, the son an Irish mother, Eileen and Hungarian father, Laszlo, who had emigrated to the North East from Hungary with his parents in the late 1930s and where, with the help of a Government grant, his father, Paul's Grandfather, set up a electroplating business.

* went to the Royal Grammar school, Newcastle (right) and won a national poetry competition sponsored by the 'Daily Mail' at the age of 16 in 1962 and saw the prize pay for his first foreign holiday and also won a scholarship to study English at Pembroke College, Oxford. 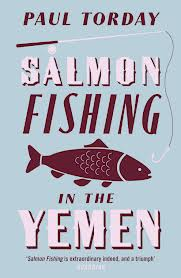 * left university in the 1960s, followed a business course in Manchester, worked in market research in London, then a company in Leeds before joining the family firm in Carlisle at the age of 27 in 1973 while writing two novels in his 20's, which went into a drawer and were shared with no one, but was writing poetry for a magazine, the 'Little Word Machine'.

* saw the family company expand and took over its running from his father and uncle but was forced to sell it in the 1990s before retrieving his business career and going on to buy several other companies.

* in his mid forties to fifties used his experience in the oil and gas industry and understanding of the insanity of much government bureaucracy, as inspiration for a novel, 'Salmon Fishing in the Yemen', the idea of a
Yemeni sheikh who wants to introduce salmon fishing to his desert homeland, coming to him in a business meeting in Oman.

* sent the manuscript to an agent, forgot about it and found that six months later, it had been the subject of a competitive auction and the talk of the 'Frankfurt Book Fair' going on to sell more than 500,000 copies in Britain and win the 'Bollinger Everyman Wodehouse Prize' in 2007, when he was 61 years old.

* faced with a cancer diagnosis shortly after the book was published,  recognised the extent to which his time might be limited and said that he, perhaps treated writing like 'learning to ride a bike : he kept pedalling like mad because he was afraid that if he fell off he might not be able to get back on.'

* continued to work in industry and published, generally to critical acclaim, a new novel every year including : 'The Irresistible Inheritance of Wilberforce' in 2008, the story told backwards of an alcoholic's decline through an addiction to fine wine : http://www.youtube.com/watch?v=rmH4jN0v9L4

* wrote 'The Girl on the Landing' a ghost story in 2009 and 'Light Shining in the Forest' this year, a crime thriller about abducted children set in the North-East of England.

* exuded the air of the English country gentleman, enjoyed food, wine and salmon fishing, liked shooting, walking and climbing and lived with his second wife at the Jacobean, Chipchase Castle in Northumberland, on an estate she had inherited and which he helped to manage.

* was too ill to attend the premiere in 2011, of the film of 'Salmon Fishing in the Yemen', which starred Emily Blunt as the sheikh's representative and Ewan McGregor as a cynical fisheries expert who begrudgingly accepts the challenge.
http://www.youtube.com/watch?v=-wOF_7JMy5U Kirsty Dunseath, Publishing Director at Weidenfeld and Nicolson Fiction said that in many ways he :
"invented his own genre. His extraordinary fiction was filled with warmth and a wry, humane wit. He was a gentle observer of the foibles of human nature and our social behavior. He wanted to entertain, but his novels were also infused with a deep social awareness, exploring issues such as political expediency, alcoholism, mental illness, class and our national heritage."

P.S. Paul particularly enjoyed the fact that Yemeni tourist organisations were later often asked for details of their fishing holidays.