It is ironical that on the very day BBC TV is to broadcast 'The Great Train Robbery' with Jack Gordon playing his character, that Ronnie should die at the age of 84. It also says something about Britain today, that his death was the first item on BBC Radio 4 news this morning, indicating the reverence with which old criminals are held. I noted something similar in my post about Mad Frankie Fraser, back in the summer :

What you possibly didn't know about Ronnie, that he :

* was born in Lambeth, London, was 10 years old when the Second World War broke out in 1939 and was evacuated to Cornwall and after the War was enlisted for national service in the Royal Air Force at the age of 18 and was given a dishonourable discharge at the age of 20, on a charge of 'desertion' and after breaking into a chemist shop.

* started his criminal career and a spell in prison after a conviction for stealing a car and on release, took part in a failed robbery on a bookmaker's office in Lambeth and in prison again, met Bruce Reynolds.

* on release from prison, tried to go straight, trained as a carpenter and at the age of 27 in 1956, married the 17-year-old daughter of a primary school headmaster, with whom he had three sons.

* in 1963 at the age of 34 and in need of a loan, approached Bruce, who offered him a place on a proposed train robbery and was tasked to find a suitable engine driver to move the train forwards to the unloading point and on the night of the raid.

was a passenger in the getaway car and only saw the haul of money once the gang returned to Leatherslade Farm.

* had taken part in the crime of the century, the hold up of the mail train from Glasgow to London in the early hours of 8 August 1963 and stealing the haul of £2.6 million in used bank notes, £40 million in today's value, during the course of which, the engine driver was hit on the head with an iron bar.

* played an undistinguished part in the robbery : the driver he had enlisted had not driven a diesel engine and was replaced during the raid by the injured, bleeding driver Mills; was a passenger in the getaway car and only saw the haul of money once the gang returned to Leatherslade Farm; left his fingerprints on a ketchup bottle at the farm; three weeks later, was arrested along with 11 other members of the gang in South London. 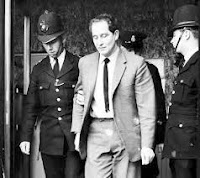 * was in 1964, along with nine of the 15-strong gang, jailed for the crime and received a 30 year sentence, served 15 months before escaping from Wandsworth Prison by scaling the wall with a rope ladder and dropping onto a waiting removal van, fled to Brussels by boat, then went with his wife and sons to Paris, acquired new identity papers and underwent plastic surgery.

* in 1967, with the police closing in, fled to Brazil which had no extradition treaty with Britain and seven years later, after a 'Daily Express' team broke the story of his whereabouts, saw Scotland Yard send Detective Jack Slipper arrive but fail to extradite him, his Brazilian girlfriend being pregnant and Brazilian law did not allow a parent of a Brazilian child to be extradited.

* as a known felon, could not work, visit bars or be away from home after 10 pm so provided an income, by hosting barbecues for tourists at his home in Rio, recounting his involvement in the robbery, selling 'Ronnie Biggs' mugs, coffee cups and T-shirts http://www.youtube.com/watch?v=1IBTdbEBBgQ and recording vocals on two songs for the film about the Sex Pistols, 'The Great Rock 'n' Roll Swindle'. http://www.youtube.com/watch?v=j-oZeSqxT2I

* in 2001, at the age of 72, announced to 'The Sun' newspaper that he would be willing to return to Britain, aware that, with 28 years of his sentence left to serve, he would be detained upon arrival which was the case and according to his son, was motivated not simply by his need for health care, but also his desire to "walk into a Margate pub as an Englishman and buy a pint of bitter"

* in 2007 at the age of 78, appealed, from Norwich Prison, to be released saying : "I am an old man and often wonder if I truly deserve the extent of my punishment. I have accepted it and only want freedom to die with my family and not in jail. I hope Mr. Straw decides to allow me to do that. I have been in jail for a long time and I want to die a free man. I am sorry for what happened. It has not been an easy ride over the years. Even in Brazil I was a prisoner of my own making. There is no honour to being known as a Great Train Robber. My life has been wasted."

* was released from custody in 2009, two days before his 80th birthday, on 'compassionate grounds' due to his deteriorating health but said "I've got a bit of living to do yet. I might even surprise them all by lasting until Christmas, that would be fantastic." 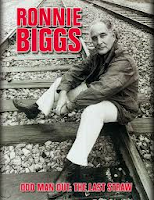 * in 2011, was admitted to hospital with another suspected stroke and in November, launched his autobiography, 'Ronnie Biggs: Odd Man Out, The Last Straw' and unable to speak, used a word board to communicate with the press and in March this year ( right) attended the funeral of fellow train robber and mastermind of the robbery, Bruce Reynolds.
Posted by ...............................JohnBoy at 14:04