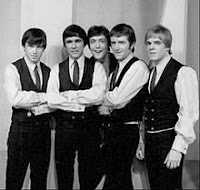 Dave, erstwhile drummer, leader and with Lenny Davidson, surviving member of the 'Dave Clark Five', first of the 'British invasion' bands to follow the Beatles to the USA in the 1960s, is 71 years old today.
From left to right : Denis, Dave, Mike, Rick and Lenny as they were.

My memory of Dave and his band dates from the year 1965, when I was 18 and Dave was 23 with a hit record he had written with Lenny called 'Catch Us if You Can'. 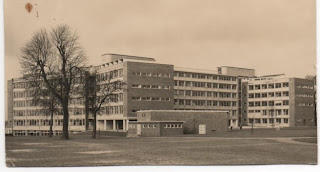 From the age of eleven I had attended this huge secondary school, built to house me and 2,500 other the post Second World War, South London, baby boomers, called Eltham Green Comprehensive School.

In that Summer of 1965, the Headmaster, Mr Davies, had planned his usual 'Farewell to the Sixth Formers Assembly' in the school hall and I was one of the 18 year old leavers.

A tradition had grown up that, the Sixth Form school leavers would do something to disrupt the Headmaster's speech made in the hall filled with a thousand pupils and relayed by the tanoi broadcasting system to the rest of the school, seated in their form rooms.
1. It had all been fairly mediocre stuff in the past, like planting alarm clocks in cupboards in the hall, timed to go off when the Old Man was into his speech or chaining the exit doors, so no one could get out at the end of the Assembly.

2. This year it would be in a different league, for unbeknown to any of us, five of the lads in the sixth form, had a drink in the local pub the night before and, after closing time, dressed in dark clothing, had climbed over the school gates and made their way to the hall, where, by chance, they found an exit door open. 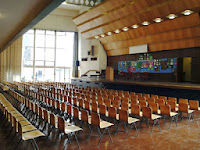 3. Once inside the darkened hall the tick of the clock startled them. They put their plan into effect. 'B' stood on tables and chairs and placed an old fashioned loud speaker, out of sight, on the wooden sounding board (seen on the right) and way up above the stage. They then ran a single wire room the speaker, down the wall, through a door opening and along the wall of the corridor behind the hall and into one of the small music rooms. The wire was fed into an old fashioned reel-to reel tape recorder and a prerecorded tape placed on the deck. The lads then made their exit from the school.

4. After lunch the next day, the hall began to fill up. First the younger kids downstairs and then the Sixth Form in the balcony. It was at this point that 'F' had been delegated to make his way to the music room to switch on the tape which was timed to play blank for 20 minutes. 'F' noticed that the indicator light was on and so placed the leather bag of one music teachers against it and a tray of glasses on top for good measure. He then made his exit and went to the balcony. 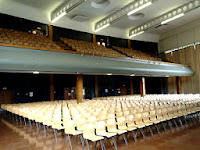 Our Sixth Form tutor on the balcony said to one of the lads : "Nine out of ten 'W"
He was wrong, it was '10 out of 10'.
The Headmaster got the police in, but they could find nothing, since the lads had not forced an entry.
Sadly, 'G', the mastermind behind the single wire and tape died in a motor accident some years ago.
When I was 19 and travelling round Greece in the summer of 1966, I met other students from London schools who had heard about that caper.
I can't think that Dave's song has ever been put to such apposite use as it was on that South London summer's day, 48 years ago.

What I didn't know about Dave, today's birthday boy was that he :

* was born in Tottenham, North London and left school without qualifications at the age of 15 and becoming a film stuntman, performed in over 40 films and in his late teens in the late 1950s, bought himself a set of drums, taught himself how to play them and formed a skiffle group to raise funds so that his football team could travel to the Netherlands.

* saw the group grow into The Dave Clark Five' with him as leader, co-songwriter, manager and producer and grow in popularity, unseating the Beatles "I Want to Hold Your Hand" from its number one spot in the British singles chart in January 1964 with "Glad All Over". http://www.youtube.com/watch?v=P94S8IAv94w

* followed the Beatles to the USA in 1964, was on The 'Ed Sullivan Show' more times than any other English group and  achieved 15 consecutive Top 20 hits including :
'Any way You Want It'.
http://www.youtube.com/watch?v=AH1JEI79emU&feature=related

'Do You Love Me'.
http://www.youtube.com/watch?v=FtBX-4pIWyQ 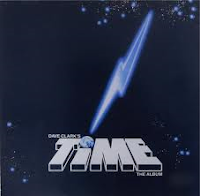 * in the late 1960s, in addition to managing the band, began directing and producing for television and in 1968 made  'Hold On, It's the Dave Clark Five' which was followed by the break up of the band in 1970 and his ending his drumming in 1972, after beaking four knuckles in a tobogganing accident.

* became a successful entrepreneur and a multi-millionaire, with property in West London, with revenues from his rights to all the Dave Clark Five music and episodes of the '60s tv music show, 'Ready, Steady Go!'.

* in 2008, at the age of 66 and marking the 50th anniversary of the founding of this band, was inducted into the USA's 'Rock and Roll Hall of Fame' and made a rare public appearance with, the then, two other surviving band members and accepted the award on behalf of the group. http://www.youtube.com/watch?v=KKTtGjYl5yU

Happy Birthday to our dear friend Dave Clark , leader of the DC5. Fab musician, producer, filmmaker &now author. One of my fave people ever.

To which I replied :
"Happy Birthday" indeed,
and added a link to this post.