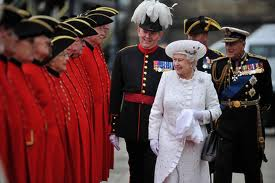 Like millions of other Britons, I've been watching, on television', the Queen's progress on the royal barge in a flotilla of a thousand boats on the River Thames. It's part of her Diamond Jubilee celebration.
Here she inspects a line of old men who are 'Chelsea Pensioners' accompanied by the old Prince who is her husband who will be 91 years old next sunday. 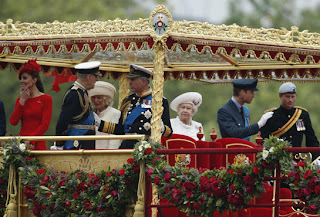 Once on board the royal barge, she was joined by another old man, her 63 year old son, Prince Charles, seen here with his father.

Tens of thousands of rain-soaked people, many of them old men, have packed the shores and bridges of the River Thames to watch the pageant weave its way up the River.

Leisure cruisers, rowing boats, yachts and canoes made up the colourful Thames armada which also featured old vessels from the 1940 evacuation of British and Allied troops from Dunkirk in Northern France in the Second World War in 1940. Speaking after his vessel passed the Queen, Ian Gilbert, 61, skipper of one of these little ships called 'Papillon', said: "I don't think anyone will put a show like this on again in our lifetime. We're particularly proud because we had the biggest contingent of any association and I think that shows the importance of these little boats to the country and to the sovereign."

Meanwhile, all over Britain, millions of people have attended 'diamond jubilee street parties' in honour of the 86-year-old, the only British monarch after Queen Victoria, in a thousand years of monarchy, to have sat on the throne for 60 years. 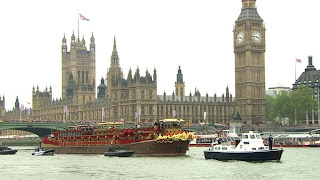 What a strange old country is her realm of Britain.