Britain is still a country for and says "Happy Birthday" to a very old and brilliant, marxist historian called Eric Hobsbawn

Eric Hobsbawn, marxist historian and intellectual, was born during the First World War, 95 years ago today. I remember his books being on my 'reading list' when I was studying history at the University of Sussex over 45 years ago.

What you possibly didn't know about Eric, that he :

* was born in Alexandria in Egypt to Jewish parents, Nelly and Leopold Obstbaum and where a clerical error at birth altered his surname from 'Obstbaum' to 'Hobsbawm' and then grew up in Vienna in Austria and Berlin in Germany, where his parents spoke to him and his younger sister in English.

* was 12 when his father died and started working as an au pair and English tutor and then became an orphan at age 14 upon the death of his mother, was adopted by his maternal aunt, Gretl and paternal uncle, Sidney, who married and bought him and his sister up in Berlin.

* joined the 'Association of Socialist Pupils', an offshoot of the 'Young Communist League' in Berlin in 1931 and after Hitler came to power in 1933, joined the Communist Party in 1936 and then moved to London where he attended
St Marylebone Grammar School.

* went to King's College, Cambridge where he was a member of the 'Cambridge Apostles' and graduated with a doctorate in history on the Fabian Society.

* during The Second Wold War, served in the Royal Engineers and the Royal Education Corps and then started his career in academia in 1947 and progressed from lecturer in History to Emeritus Professor at Birkbeck College, London in 1982

* in 2003 he was awarded the Balzan Prize for European History since 1900, 'for his brilliant analysis of the troubled history of twentieth-century Europe and for his ability to combine in-depth historical research with great literary talent'
and was described in 'The New York Times' as 'one of the great British historians of his age, an unapologetic communist and a polymath whose erudite, elegantly written histories are still widely read in schools here and abroad.'

* was described by fellow historian Niall Ferguson : 'That Hobsbawm is one of the great historians of his generation is undeniable. . . . His quartet of books beginning with The Age of Revolution and ending with The Age of Extremes constitute the best starting point I know for anyone who wishes to begin studying modern history. Nothing else produced by the British Marxist historians will endure as these books will.' 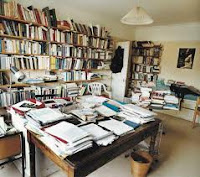 Eric's study on the right :