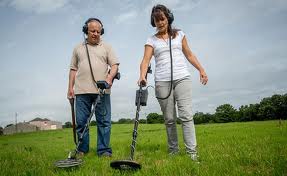 So, Reg, how did it feel to find £10m? One man and his mate spent 30 years searching for a hoard of hidden silver. 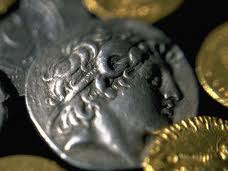 It told the story that :

*  best friends, 70 year old Reg Mead and Richard Miles, 49, have, for 30 years, walked up and down the fields on the Island of Jersey, sweeping their metal detectors above the furrows, straining their ears for the smallest metallic bleep as they searched and searched for a cache of 2,000-year-old hidden treasure, once vaguely hinted at by a farmer’s daughter half-a-century ago.


* on a gloomy day in February, Richard suddenly yelled : "I’ve got one! I’ve got one! "as they discovered a stash of 120 Iron Age silver coins which was just the beginning, because Reg, a part-time satellite engineer and Richard, a customs and excise officer, carried on in their spare time — up and down, up and down.

* finally, on June 5, Reg’s detector picked up an unusually loud signal, the pair called in a team of professional archeologists and together they unearthed more than 50,000 handmade coins from the 1st century AD, said to be worth £10 million. 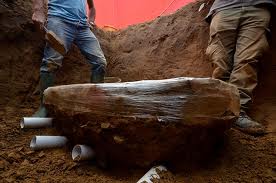 * the cache was heralded by Dr Philip de Jersey, a former Celtic coin expert at Oxford University as "extremely exciting and very significant, and the largest hoard of Iron Age coins ever found in the whole of the Celtic coin-using world".

* the coins from 'Armorica', modern-day Brittany and Normandy, were extraordinarily well preserved and intricately decorated on one side with an exotic head with tattoos, plaited hair and necklace and the other with a stylised horse.

* Reg said that : "they were all stuck together and weighed nearly a ton. It took four days of digging and a crane to get them out. Looking back, there was no logical reason why we would persevere in those fields for so long. But something made us. Something kept us going."

*  it is possible that in 55 BC, as Julius Caesar’s army sliced and pillaged its way through Gaul and Roman galleys popped up off the coast, a Celtic tribe called the Coriosolitae buried their treasure in a panic and according to Reg : "They must have dumped it in a hurry. There was no box, no container, just a rough-shaped hole and they hurled it in. Maybe they were taken into slavery, maybe they were all killed. But it’s been sitting there for over 2,000 years. How can anyone not be interested in history? How can anyone not be interested in metal-detecting?"

*  Ruth, Reg's wife said their lives have been thrown into disarray : "It’s been a rollercoaster. The phone won’t stop ringing. Everyone’s so pleased for us. He’s had calls from America, Australia, Thailand, Canada, Spain and South Africa, and it won’t stop. I wish it would now. I can’t think straight."


Reg on You Tube :
http://www.youtube.com/watch?v=WkYUmXJxW1I

Photos of the finds :
http://izismile.com/2012/06/28/treasure_found_after_decades_search_9_pics.html

P.S. Reg is at pains to point out that there is a long process to go through before he and Richard see any money from this treasue trove.

Labels: Reg Mead and his old coins on Jersey