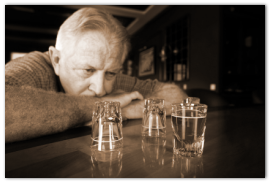 In yesterday's BBC tv 'Panarama' programme, 'Old, drunk and disordely', Joan Bakewell, a former  Government 'Voice of Older People' advisor, investigated the hidden problem of alcohol abuse in old people and asked :
' why the over 65s are far more likely to drink every day, to drink at home and to drink alone ?'

It was a very sobering affair and made the following points, that :

* 1.4 million old people are estimated to drink too much.

* in England last year, there were more admissions to hospital of old people for 'alcohol-related injuries and illnesses' than of 16 to 24-year-olds and in the last five years, there has been a 62% increase in alcohol-related admissions for the over 65s.

* in Hampshire, the local Primary Care Trust which has the highest number of hospital admissions of over-65s in England for alcohol-related problems, has responded by setting up a specialist alcohol team at the Queen Alexandra Hospital in Portsmouth to help identify and tackle the issue.

* Brian Killen, 65 was treated by the team and has now been dry for two years but used to be regularly in and out of the Casualty Department and some days was drinking up to two bottles of vodka a day and six to eight cans of super strength lager and said :“Some mornings I woke up… I couldn’t walk… I was actually crawling along the floor just to get to the toilet and then getting on to the toilet. It was a total nightmare…”

* Dr Richard Aspinall, a Consultant Hepatologist in Portsmouth said : "We think of a very visible social disorder, consequences of young people binge drinking on a Saturday night in our town centres, but what's much more hidden is quiet, below the radar drinking at home."

* with the number of people over 65 expected to nearly double by 2050, some experts fear harmful drinking by old people could get worse in the years to come and Sarah Wadd, 'Director of the Substance Misuse and Ageing Research Team' at the University of Bedfordshire, said : “We might be on a cusp of an epidemic of people drinking problematically in old age.”

﻿
* roughly a third of older drinkers are thought to first develop their drink problem in later life with more over 65s with 16% of the 65 and overs drink almost every day, compared to 2% 16-24 year-olds.

* former university lecturer, Chris Ponder, said his early retirement and social isolation were behind his slide into addiction where at his worst, was drinking more than a bottle of vodka day and said that drink offered the comfort of "obliteration" and that "it was far easier just to drink a couple of slugs of vodka and turn the television on and if it was raining that was a good excuse not to go out."

Labels: Old men drink too much