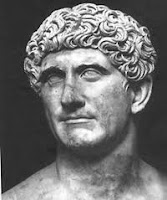 Mark Antony in Shakespeare's 'Julius Caesar' said : "The evil that men do lives after them; The good is oft interred with their bones".

An article in'Gaurdian' today was entitled :

Interactive gravestones: how the dead live on, online

It made the following points, that traditional graveyards are being transformed by interactive headstones :
* which provide a revolutionary way for people to remember loved ones though 'quick response codes'.

* when scanned by smartphones, open up an 'online biography' of the dead person with the related webpage showing a profile with pictures, videos and tributes from family and friends.and those given access to the website can also add tributes of their own.
* have embedded or glued on them, the £300 codes etched on to a small granite or metal square.

The Managing Director of funeral directors 'Chester Pearce' of Poole in, Dorset, Stephen Nimmo, said the QR barcodes can also be put on memorials and tribute plaques on benches.

Stephen said that he had first seen the idea used in the in the USA and his interest was further sparked after seeing graves of former presidents in Red Square Moscow on the  Kremlin Wall Necropolis.

"People often wander around cemeteries and look at gravestones and wonder who that person was. By using the QR codes they can find out all they need to know".

Labels: Old men live on through their gravestones