An article in 'The Daily Mail' this week was entitled : 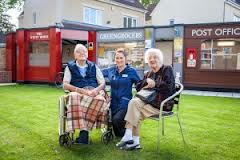 Alzheimer's patients get a trip down memory lane: Care home recreates 1950s street... including a pub

It told the story of a company called 'Grove Care', which has built an old style street called 'Memory Lane' on land between two care homes it runs for 80 old men and women in Winterbourne, Bristol.

* with its traditional local pub, quaint cafe and greengrocers with Oxo adverts on the walls and Second World War ration books on the tables was carefully constructed to help residents suffering from dementia and Alzheimer’s to feel more comfortable and possibly improve their ability to recall their own past.

* was designed by architects who studied photographs of 1950s streets to capture the era in the design of the shops and pub and then staff combed through scrap yards, charity shops and auction websites to unearth  objects to fill the buildings.

* was furnished with original adverts for Oxo, Bisto and Wall’s, as well as an authentic phone box and post box and had newspapers and magazines from the period, detailing the Queen’s Coronation.

* had freshly made cakes in the greengrocers, which has weighing scales inside and an old delivery bike propped up nearby and beer in the White Hart pub, with its tobacco tins, vintage beer mats and beer stools.
Manager, Christopher Taylor said :
"It is really important for those with dementia who are mobile to have a destination. They can visit the pub or the post office – this makes it a walk with a purpose, which is so important. When they are there they can look at the memorabilia. Our staff can then start a conversation about it with them."

Research in 2009 by Exeter University found that :
Chatting with peers about the War years caused those with dementia to experience an average of 12% boost in their ability to remember.

Professor of Social Psychology, Alex Haslam, said: ‘If you had a drug that could do that, you could make a lot of money. The point is that the drug is the group. I think our sense of worth comes from the approbation of our peers – the group gives us a reason to live and a reason to engage.’

The project shares similarities with BBC show, 'The Young Ones', in which six celebrities in their seventies and eighties, including Derek Jameson, who I featured in my last posting, were taken to a house decked out in 1970s decor to explore whether reliving their heyday could allow them to feel younger. 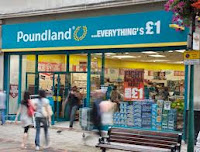 From a reader in Switzerland : Nice 'marketing' idea of the care home. One question to reveal all: Are the prices 1950's or 2020's?

and another in Manchester : In my twilight years then I would expect to see Poundland, Charity shops, boarded up shops, Aldi, vandalised phone boxes.