The 'Mail on Sunday' today had an article entitled : 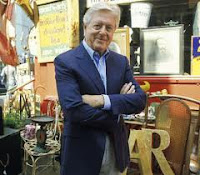 'I'd still be working if I was as beautiful as Fiona': Aspel, 79, claims BBC didn't want an 'elderly English bloke plodding around'
* Presenter claims he lost his slot on the Antique's Roadshow because the BBC wanted a glamorous figure to front the show

Michael, who is 79, presented the hit BBC1 tv programme, 'Antiques Roadshow' for eight years until being replaced by Fiona Bruce in 2008, has said that he had lost the slot because the Corporation wanted a glamorous figure instead of an "elderly English bloke plodding around". Once, one of the biggest names on British tv thanks to hit shows such as 'Ask Aspel', 'Come Dancing' and 'Crackerjack', said he struggled to find work.

*  "Fiona does a great job and looks very beautiful. That’s what they wanted, so it was entirely successful. I just wish I’d been a little more beautiful then I could still be doing it."

*  "They simply felt that they wanted to get away from the middle-aged to elderly English bloke plodding around and get some glamour in."

* "That’s the worst thing about stopping work; you begin to feel invisible whereas you were highly visible before."

*  He had turned down a request to appear in an early series of 'Strictly Come Dancing' because "the prospect of being chucked out on the first show was an ignominy I couldn’t bear."

I'm sorry to say this Michael, but if it comes to a choice between Fiona and you, I think I can say on behalf of the majority of old men in Britain, that Fiona would win hands down.
http://www.youtube.com/watch?v=FJ_dMNq7-WY 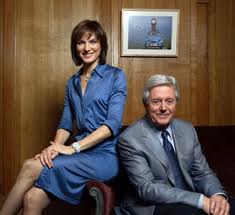 P.S. Fiona, who is 48, has her own problems with ageism and has said that said she dyed her grey hairs because she was worried about the impact ageing would have on her career.

Labels: No country for Michael Aspel