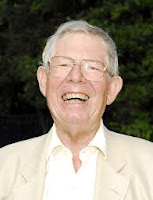 Derek Jameson, Fleet Street editor, who was jokey, outspoken and irreverent and introduced bingo and scantily clad women into newspapers and then became a popular TV and radio presenter, has died at the age of 82.

What you possibly didn't know about Derek, that he :

* was born in the East End of London and didn't know for certain who his father and until he was eight years old, that Elsie, his 'older sister', who was with him in a private children's home for waifs and strays, was in fact his mother.


* in the home, which was kept by a formidable woman called Ma Wren, slept in a bed full of bugs with four others and walked on floorboards full of rotting holes.

* had his curiosity about his father stimulated by the visits he was asked to make, by his 'big sister', to a kosher butcher's shop where the tall, blond butcher would invariably give him  a few shillings and assumed this man must have been his father.

* at school in Hackney, wrote a prize winning essay on the 'Red Cross' copied from a pamphlet more or less verbatim, except that he had taken the last paragraph and made it the first, a manoeuvre which he said 'prepared him for the ways of tabloid Fleet Street'.

* ended his formal education, including an approved school where he was sent for being 'beyond care and control', at the age of 14 and became a 'messenger' for Reuters News Agency in London during the Second World War in 1944 and progressed to become a reporter before moving on. 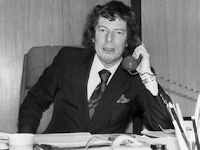 * had his first editorship, in 1960-61, with the 'London American', a paper for and about Americans in Britain before becoming managing editor of the 'Daily Mirror'.

* set about increasing Express circulation, which had dropped to 2 million, down from the 4 million of the great days of Beaverbrook and bought the memoirs of Group Captain Peter Townsend, the man Princess Margaret did not marry and gave £10,000 to Naomi James, who sailed solo around the world and increased sales by 25%.

* in 1988, began presenting the BBC1 tv show, 'People' and then presented his own series entitled 'Do they mean us?'   based on his catchphrase; "Do they mean us? They surely do!"

* in 2010, took part in BBC's 'The Young Ones', in which six celebrities in their 70s and 80s attempt to overcome some of the problems of ageing by harking back to the 1970s.