After the results of a survey conducted by One Poll and commissioned by the company, KPMG last year, headlines such as :
'Greedy geezers stealing kids’ jobs' were replaced by the more authoritative :
'Age warfare, the new threat to workforce productivity'.

The survey was conducted against the background of the fact that the number of old men and women over the age of 65 in the British labour market had passed one million for the first time.

It asked 1,500 respondents from ages 17 – 80, across a range of industries about their attitudes to work and thoughts about the future of the workplace.

The results conveyed the message from the young to the old :

"WE DON'T WANT YOU ON THE PAYROLL"

* nearly half (46%) agreed that older members of staff 'need to retire' so that younger workers have a genuine chance of career progression.

* questioning their contribution to the workforce, nearly half of those surveyed agreed that a much older workforce would drain productivity.

* only a fifth (20%) believed that employees will want to retain older workers to learn from their experience and therefore were unconvinced about the benefits that older workers can bring.

and and older colleagues from Generation X, born between the mid 60s and the early 80s

and more particularly, the Baby Boomers, born after the Second World War between 1946 and 64.

However, while younger employees feel they may bear the brunt of their older colleagues’ extended stay in the workplace, there is also a growing acceptance that older workers will have to continue working for longer.
And so the secondary message from the old to the young is :

"BUT WE RECOGNISE THAT WE ARE GOING TO HAVE TO PUT UP WITH MORE AND MORE OF YOU, FOR LONGER AND LONGER"

because the survey found that of the respondents :

* the vast majority believed that insufficient pensions will become more commonplace due to longer life expectancy.

* 81% said that as a result of living longer, more people will end their lives in poverty.

* two thirds believed that as rising long term care costs drain retirement funds, people will be forced to work until they die. 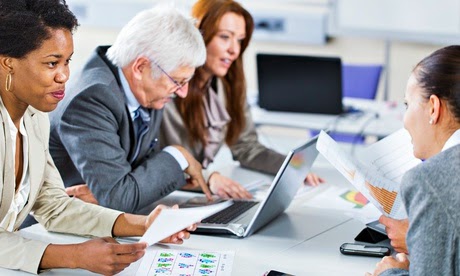