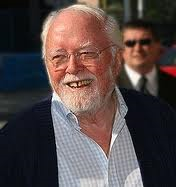 Richard, 90 years old and living in a care home with his wife of 72 years, died today.

What you possible didn't know about Richard, that he :

* was born in Cambridge, the eldest of three sons of Mary, a founding member of the 'Marriage Guidance Council' and Frederick, a don at Emmanuel College, University of Cambridge, who wrote a standard text on Anglo-Saxon law.

* was educated at Wyggeston Grammar School for Boys and then studied at the Royal Academy of Dramatic Arts.

* became eligible to fight during the Second World War in 1941, served in the Royal Air Force and after initial pilot training, was seconded to the newly-formed RAF Film Unit at Pinewood Studios, under the command of Flight Lieutenant John Boulting.

* in 1943 appeared in propaganda film .'Journey Together' and then volunteered to fly with the Film Unit on missions over Europe, filming from the rear gunner's position to record the outcome of  Bomber Command sorties. 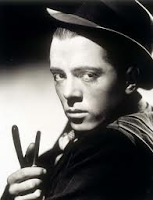 * started his film career at the age of 19 in 1942, in an uncredited role as a deserting sailor in 'In Which We Serve' in a role which would help to type-cast him for many years as 'spivs' and cowards until his breakthrough role as a psychopathic young gangster (left) in the film of Graham Green's novel, 'Brighton Rock' at the age of 24 in 1947.
https://www.youtube.com/watch?v=xOfRPeqBEQ8

* in the late 1950s, formed a production company, 'Beaver Films,' with Bryan Forbes and produced and appeared in 'The League of Gentlemen' https://www.youtube.com/watch?v=7uvHIlQ_XCg in 1959 and 'The Angry Silence' in 1960 and produced 'Whistle Down the Wind' in 1961.

* appeared in several successful comedies by the Boulting Brothers, 'Private's Progress' in 1956 and 'I'm All Right Jack' in '59 and then in 1963, at the age of 30, appeared in his first Holywood blockbuster, in the ensemble cast of 'The Great Escape', https://www.youtube.com/watch?v=7WCR4dZt7Uw as RAF Squadron Leader Roger Bartlett, 'Big X', head of the escape committee, based on the real life exploits of Roger Bushell.

* expanded his range of character roles in the '60's in 'Séance on a Wet Afternoon' (left) https://www.youtube.com/watch?v=W6dbk6RXALI
and 'Guns at Batasi'  for which he won the BAFTA Award for 'Best Actor' for his portrayal of the Regimental Sergeant Major.

* directed the all-star screen version of the hit musical, 'Oh What a  Lovely War' in 1969, filmed in and around Brighton where I was a student at the time and where a friend, Willis Pitts, got a job as a soldier extra.
http://www.youtube.com/watch?v=yqrc46ouZz8

*  portrayed of the serial killer Christie in '10 Rillington Place' https://www.youtube.com/watch?v=_NQH7aFLux0

and in 1977 he played the ruthless General Outram in Satyajit Ray's period piece , 'The Chess Player'.

* took no acting roles following his appearance in Otto Preminger's version of 'The Human Factor' at the age of 56 in 1979 until his appearance as the eccentric developer John Hammond in Spielburg's 'Jurassic Park' in 1993.
https://www.youtube.com/watch?v=PJlmYh27MHg

* directed two epic period films: 'Young Winston' in 1972, based on the early life of Churchill and 'A Bridge Too Far' in 1977 and in 1982 won the Academy Award for 'Best Director' for 'Gandhi' https://www.youtube.com/watch?v=SNmJqRV7LOA and five years later directed the anti-apartheid drama, 'Cry Freedom', based on the life and death of the acivist Steve Biko. https://www.youtube.com/watch?v=iq4VjE0_AVQ

* directed and produced his last big films, 'Chaplin' in 1992 and 'Shadowlands' in '93 and between 2006 and 07 in his 80's, spent time in Belfast, Northern Ireland, working on his last film as director and producer, 'Closing the Ring', a love story set during the Second World War. https://www.youtube.com/watch?v=1kjm4oXC6NA