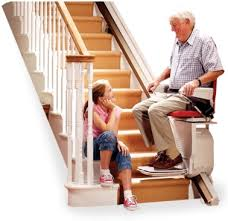 It was revealed this week that thousands of old men and women are being denied vital home alterations whose presence :

* helps to keep them out of hospital and retain their independence.

* is one reason for delays in discharging them from hospital once they have had treatment.

Improvements such as handrails, stair lifs and ramps can stop them being hurt in falls and downstairs bathrooms and widened doorways for wheelchairs can help them maintain themselves at home.

Figures from 250 local authorities suggest the rate of applications to have improvements is unchanged, but councils say fewer are being done because of financial restraint. In fact, the number being installed has fallen from 36,168 in 2010-11 to 31,871 in 2013-14 as a result of the £3.5billion cut from local authority budgets since 2010, after the Government Communities Secretary, Eric Pickles (left), promised a freeze in council tax to help hard-pressed families as the economy recovered. The Labour Opposition have attacked the 12% fall in home adaptations as a 'false economy', which have added to the pressure on accident and emergency hospital departments and pushed up medical and care bills.


The fall in the number of improvements is inconsistent across local authorities with half admitting they were doing fewer and 15 which have made savage 50% cuts. We are talking about the poorest of Britain's old men and women since the alterations are means tested, with the average cost, £6,700, but installing handrails costing as little as £50.
What sad a country Britain has become, which saves Government spending, by cutbacks on the installation of hand rails and stair lifts for the poorest of its old men.
Posted by ...............................JohnBoy at 12:57

Labels: In need of stair lift or handrail