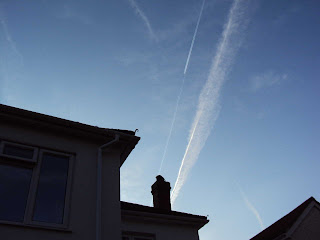 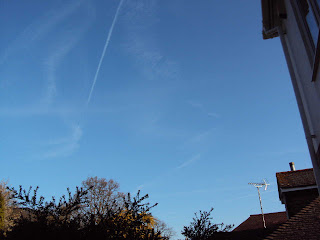 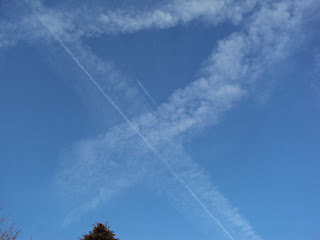 They are back - the aircraft vapour trails over my house, now that flying has resumed after the volcanic dust crisis.
I feel like Betsey Trotwood who, in David Copperfield, was as offended by the donkeys 20 metres away on her green, as I am about the vapour trails 10,000 metres up in the sky over my house. The difference is that she could take a stick and see the donkeys off . 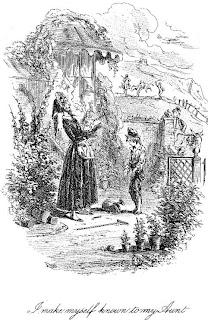 Dickens wrote : 'Janet had gone away to get the bath ready, when my aunt, to my great alarm, became in one moment rigid with indignation, and had hardly voice to cry out, ‘Janet! Donkeys!’

Upon which, Janet came running up the stairs as if the house were in flames, darted out on a little piece of green in front, and warned off two saddle-donkeys, lady-ridden, that had presumed to set hoof upon it; while my aunt, rushing out of the house, seized the bridle of a third animal laden with a bestriding child, turned him, led him forth from those sacred precincts, and boxed the ears of the unlucky urchin in attendance who had dared to profane that hallowed ground.

To this hour I don’t know whether my aunt had any lawful right of way over that patch of green; but she had settled it in her own mind that she had, and it was all the same to her. The one great outrage of her life, demanding to be constantly avenged, was the passage of a donkey over that immaculate spot. In whatever occupation she was engaged, however interesting to her the conversation in which she was taking part, a donkey turned the current of her ideas in a moment, and she was upon him straight. Jugs of water, and watering-pots, were kept in secret places ready to be discharged on the offending boys; sticks were laid in ambush behind the door; sallies were made at all hours; and incessant war prevailed. Perhaps this was an agreeable excitement to the donkey-boys; or perhaps the more sagacious of the donkeys, understanding how the case stood, delighted with constitutional obstinacy in coming that way. I only know that there were three alarms before the bath was ready; and that on the occasion of the last and most desperate of all, I saw my aunt engage, single-handed, with a sandy-headed lad of fifteen, and bump his sandy head against her own gate, before he seemed to comprehend what was the matter. These interruptions were of the more ridiculous to me, because she was giving me broth out of a table-spoon at the time (having firmly persuaded herself that I was actually starving, and must receive nourishment at first in very small quantities), and, while my mouth was yet open to receive the spoon, she would put it back into the basin, cry ‘Janet! Donkeys!’ and go out to the assault'.
Posted by ...............................JohnBoy at 23:51