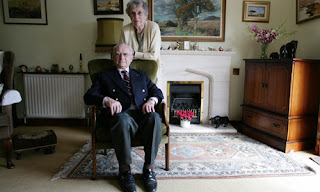 I recently read an article in the Guardian Newspaper entitled :

Mark and Cynthia Mead: Their losses in Equitable Life mean they now have to sell up.

Mark Mead is an 89 year British gent who repeatedly risked his life for Britain in its greatest hour of need during the Second World War. These are the facts of his heroism :

* served in the RAF, was shot down in his plane over Belgium, captured by the Germans and held in a notorious prisoner of war camp.

* was one of thousands of British 'Prisoners of War' forced to traipse several hundred miles during the Long March of 1945 and saw many of his fellow prisoners die in appalling winter conditions.

* having to sell their beloved bungalow and move to a smaller property after seeing their retirement income plummet.

* among tens of thousands of older people whose finances have suffered a severe blow after being caught up in the 'Equitable Life' scandal and have not yet received a penny in compensation.

* a couple who, in 1999 invested a sizable sum , including money from the sale of their previous home, with 'Equitable Life' in a 'unit-linked personal investment plan' - a stock market-based investment. They did this on the advice of an 'Equitable' representative . It was bad advice, bearing in mind their age, Mark was approaching 80 at the time, and their need for regular income.
"At that time", said Cynthia, "everyone said that's what you do for your pension".

* the investment went in, just as the stock market was reaching its peak and shortly after, it began a long slide. By 2004, due to a combination of poor performance and the withdrawals which were being made, the money had run out.

* the Financial Ombudsman Service found in their favour and, in 2005, they were awarded more than £6,000 compensation, but the damage had been done.

* in order to make up for some of their losses, they decided to take out an 'equity release scheme', which allowed them to 'unlock some of the value in their home'.
They had taken out an equity release loan in 1999, so this was their second one, which meant that, in total, they borrowed around £150,000. Now the interest is rolling up and the amount they now owe is £216,000 and increasing by £1,000 a month.

* this year another Equitable Life investment providing them with an income of £2,000 a year, in effect, dried up. It was this that led the couple to conclude they would have to downsize and move home.

* "I don't think I've ever cried as much in my life as I've cried in the last few weeks," said Cynthia, 83, sitting in the lounge of their chalet bungalow, their home for 12 years. "The best-laid plans have gone awry," added Mark.

* They have just sold their property and put in an offer on a small mews cottage that has been accepted. "We've got to be out by 23 May," says Cynthia. "We don't want to, but we can't afford to go on living here."* Cynthia said : "I know it's inevitable. Mark doesn't want to accept it. Having to get rid of so many of our things will hurt more than anything else."
She said that, having never claimed anything from the state, they are now getting pension credit and attendance allowance and said she was reluctant because of the 'stigma' in claiming benefits.

* "It's unbelievable it should end like this," she said, adding she feels sad because it's only in the last few years they have had to worry about money. She believed they, were victims of the 'mismanagement' by 'Equitable' and said "I don't blame anyone particularly." Asked how he felt about it all, Mark said: "Thoroughly depressed."
* The couple's MP has written to the Chancellor, Alistair Darling, and to 'Equitable' about their plight.

* He said : "This is someone who gave valiant, courageous service in the Second World War ... I find it totally appalling that, at his time of life and in his state of frailty, he and his wife should be placed in such dire financial circumstances."

* An Equitable spokesman said: "We have accepted the ombudsman's conclusion that inappropriate advice was given and, where that resulted in a loss, redress was paid."