One of the possible new occupations for an old man like me to adopt is : to walk. There are the obvious benefits of exercising, my increasingly arthritic frame and if I walk in a group, I get to enjoy the company of other ancient walkers. Therein lies the problem.

I live in conurbation in North Kent called the Medway Towns. Apart from the City of Rochester, it is an unlovely and relatively poor part of the South East of England, which has never really recovered from the closure of Chatham Dockyard in 1970.
The closure was caused by the retraction of Britain's colonial role around the world in its decline from world power status. For the Medway Towns, it was devastating as the wages and salaries of Dockyard employees, disappeared from the local economy overnight.

So, the opportunity to walk and get out of 'The Towns', therefore has its attractions.

There are 2 groups of walkers/ramblers in this area.
Which one should I join ? :

The 'Medway Towns Footpaths Group' or the 'Medway Ramblers' ?

Let's see what is on offer : 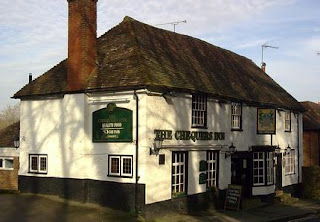 Supposing I want to join both. I can, but I can't do all the walks. I have to choose. I wonder why ? Is there some ancient rivalry between the two groups ? Have ancient walkers fallen out in the past ?

Well, in choosing between the two there isn't much to go on, apart from the fact that the Footpath emphasise whether dogs can go or not and the Ramblers always end up with a pub at the end.

So dogs or pub ? What is it to be ? Well, I don't like dogs but, is there a bit of a 'class' thing here ? Shopping centres or old pubs to meet and dogs and no dogs.