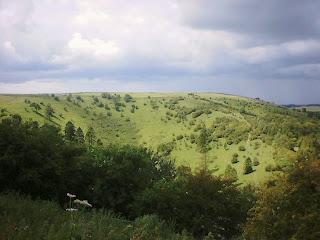 On Sunday afternoon I walked along part of the ancient trackway called 'The Ridgeway' in Hampshire. The walk takes you past 'Watership Down' where Richard Adams set his story of good versus evil in the world of rabbits which was published 38 years ago.

I had enjoyed the walk with its splendid views of the Hampshire countryside. I paused to speak with a couple at Ladle Hill. They told me that it was an unfinished Celtic hill fort. I thought it was a barrow or burial site. I had romanticised that the chieftan who had ruled this area when he lived, could preside over it after death.

While conversing with the couple at Ladle Hill, my wife and daughter had walked ahead. I quickened my pace to catch up.

I want to be very precise about the next sequence of events.

1. A woman appeared on the Ridgeway with a little spaniel dog.

2. I don't like dogs and I don't like being confronted by dogs, after all, this is our place, not a dog place.

3. The woman smiled. I didn't pause. The untrained dog got under my wellington boots. I stumbled. I went down like a sack of potatoes, fell forward landing on my hands, to break my fall and my knees.

She made no attempt to help me off the ground.

I said : " You should keep your dog under control."

This is the best bit, she said : 5. So, apparently, it's my fault that I allowed a puppy to get under my 62 year old feet and trip me up, even though the woman was committing a civil offence by allowing her dog to run around without a lead in a public place.

When I caught up with my wife and daughter, my wife accused me of being a 'puppy kicker', so we know who she blamed.