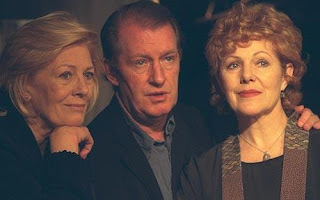 Corin was a member of the 'Regrave' acting dynasty: the son of Michael Redgrave,, the brother of Vanessa and Lynn Redgrave, the father of Jemma Redgrave and the uncle of the late Natasha Richardson.

* Educated at Westminster school, he won a scholarship to King's College, Cambridge, where he got a 'first' in classics. His contemporaries included Ian McKellen, Derek Jacobi and Trevor Nunn. Shortly after leaving Cambridge, he played Lysander in Tony Richardson's 1962 'A Midsummer Night's Dream'.

* Played the Pilot Officer in Arnold Wesker's 'Chips With Everything' in 1962 and in New York the following year and appeared in a number of West End shows.

* His elder sister, Vanessa, stimulated his interest in politics in the early 1960s and encouraged him to join the 'Campaign for Nuclear Disarmament' and in 1971 he joined the Trotskyist 'Workers Revolutionary Party'.

* From 1974 to 1989, his stage, film and TV appearances became ever rarer. He took time off from the WRP only to help his father write his autobiography, 'In My Mind's Eye', in which his father's tortured bisexuality was cryptically acknowledged.

* He re-emerged into the limelight in the late 1980s, playing Coriolanus at the Young Vic and was as a stronger, better actor who had a particular gift for playing establishment figures tortured by doubt and fear - something he had witnessed first-hand in his own father.

* In 2004 he enjoyed a rich season with the Royal Shakespeare Company and reached the summit as King Lear on the same stage where his father had played the role more than 50 years previously. "I was 13. My father was playing 'Shylock', 'Antony' and 'Lear'. My mother, also in the company, always a little in my father's shadow, played Octavia and Regan. I learned to love the sound of Shakespeare from my father who had an effortless command of the rhythms, cadences and stresses of blank verse. But it was my mother who taught me to love Shakespeare's stories."

* He claimed for many years that he had been dropped by the BBC because of his radical politics, but for all that, he appeared in 'Persuasion' in 1995 and 'The Forsyte Saga' in 2002 and also wrote two BBC radio plays.

* He had also appeared occasionally in films since the 1960s : 'Man for All Seasons', 'The Charge of the Light Brigade' and 'Oh! What a Lovely War'.

Sir Trevor Nunn : "I was Corin Redgrave's friend and employer over many decades and I think of him as one of the most extraordinary and inspirational people I have ever met."

Amnesty International UK director, Kate Allen : "Corin was a staunch defender of human rights and in particular his work campaigning for the rights of Guantánamo prisoners will be remembered for years to come."

Director Roger Michell : "Corin's performance as King Lear was selfless, unshowy and truthful, with a complete absence of rhetorical and theatrical tricks. He was a great man who stood head and shoulders above others for whom success, recognition and praise are the only things that matter."