In Britain : England is no country for old women 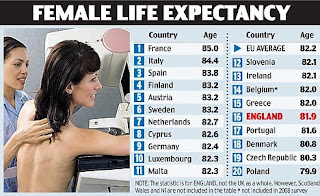 Britain's old women, England is no place for you.

A recent report has revealed that for English women :

* poor cancer detection and bad diet mean that women in most other European countries live longer than you.

* you can expect to live to 81 years and 11 months, but your Slovenian counterpart will have an extra two months of life, even though the former Yugoslav republic spends far less on healthcare.

* experts say the difference can be put down to National health Service failures to spot cancer and heart disease early enough, as well as the fact that the British diet is worse than in other countries.

* chronic liver disease among you has climbed above the EU average, driven by the rise in binge drinking.

* your teenage pregnancy rates are the highest in western Europe and your obesity levels are the worst in the whole continent.

* In the rest of the world, only women in the U.S., Mexico and New Zealand are fatter than you.

For old British men, better news for you :

* Your life expectancy of 77 years and eight months is among the best in Europe, behind only Sweden, Italy, Cyprus and France.

My favourite comments which the article generated on the web :

'More useless statistics, once you reach the old age of 80, it doesn't make the slightest difference if you die at 81, 82 or 85 because most likely it means you are stuck on a chair or bed most of the time and waiting for death to save you from a life of boredom....'

'Wow, I could live a whole TWO MONTHS longer in Slovenia. Must move there now...'

'And remember - the last extra few months/years will most likely be in one of Gordon's wonderful care homes - better to drink and eat a little more now and avoid as much of that particular fate as possible.'

I've been wondering where to put this picture for some time> Here would seem the apposite place :