Peter Dennis Blandford Townshend, who is known principally as the guitarist and songwriter for 'The Who' with a career which spans more than forty years, is 68 today.

What you possibly didn't know about Pete, that he :

* was born in Chiswick, London into a musical family, his father a professional saxophonist in 'The Sqaudronaires' (right) and mother a singer and was drawn to rock and roll as a boy and saw Elvis in 'Rock Around the Clock' repeatedly at the age of 11.

* got his first guitar when he was 12 and was influenced by Link Ray, John Lee Hooker, Bo Diddley and Hank Marvin until he heard "heard rhythm & blues and it was all over." 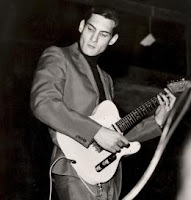 * said : " The first record I remember was 'Green Onions' by Booker T. https://www.youtube.com/watch?v=U-7QSMyz5rg I never listened that much to Muddy Waters or people like that. It was Steve Cropper (right) who really turned me on to aggressive guitar playing."

* left school Acton County Grammar School at the age of 16 and enrolled at Ealing Art College with a view to becoming a graphic artist and at 17 with school fiend , John Entwistle formed 'The Confederates', a Dixieland duet and played banjo with John on horns.

* moved on to 'The Detours', a skiffle/rock and roll band fronted by Roger Daltrey another former schoolmate and in 1964 renamed themselves 'The Who' and had drummer Keith Moon join them.

* became known for his eccentric stage style during the band's early days, often interrupting concerts with lengthy introductions of songs and with a signature move in which he would swing his right arm against the guitar strings in a style reminiscent of the vanes of a windmill and became one of the first musicians known for smashing guitars on stage and would repeatedly throw them into his amplifiers and speaker cabinets.

In the intervening 40 years :

* created the rock operas 'Tommy' and Quadropenia' and saw 'The Who' continue to thrive, despite the drug related deaths of Keith in 1978 and John in 2002. 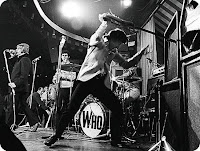 * suffers from partial deafness and tinnitus believed to be the result of extensive exposure to loud music including the concert at the Charlton Athletic Football Club,London, in 1976 listed as the 'Loudest Concert Ever' where the volume level was measured at 126 decibels 32 metres from the stage.

* has been involved with various charities and other philanthropic efforts both as a solo artist and with 'The Who and organised his 1974 benefit show to raise funds for the 'Camden Square Community Play Center.'

* had donated money through his services to :
- drug rehabiltation programmes 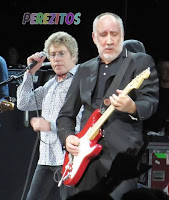 * in 2011 launched with Roger 'The Daltrey/Townshend Teen and Young Adult Cancer Program' at the Ronald Reagan UCLA Medical Centre in Los Angeles to be funded by The Who's charity, 'The Who Cares Trust'.
http://newsroom.ucla.edu/portal/ucla/the-who-rock-icons-launch-daltrey-218302.aspx