Britain, a country which, for 70 years failed to recognise the bravery of the young sailors who served on Arctic convoys, finally grants a few old men their medal

All those years ago, tens of thousands of men stood at Loch Ewe, fearful they might never again see the shores of Britain and 3,000 did not. A remote inlet in the northwest Highlands of Scotland, it was the starting point for the Arctic Convoys on their treacherous journeys to the Soviet Union during the Second World War.

Described by Winston Churchill as the "worst journey in the world ", the heroes were risking their lives running a gauntlet of German warplanes and U-boats to keep the Red Army fighting on the Eastern Front.

* consisted of thousands of vessels which made the treacherous 1,600-mile journey past the enemy-held shores of Norway, through the Barents Sea to the frozen wastes of Murmansk and Archangel.

* carried four million tons of cargo including tanks, planes, fuel and food to help the Russia slow Germany's advances on the Eastern front.

* carried a total of more than 66,000 Royal Navy sailors and merchant seamen and during the War a total of 87 merchant ships and 18 British warships were sunk.

In the Post War world, the Cold War meant it was 'politically difficult' to give the survivors a medal for assisting the Soviet Union, a country which, although a former ally, was now Britain's 'enemy' and so those men who had served were awarded the 'Atlantic Star', even though that was a separate campaign 800 miles away.
https://www.youtube.com/watch?v=WCZSEgcfs50
Last year, however, the Prime Minister, David Cameron, ordered the 'Arctic Star' medals amid concerns many veterans would die before they were awarded and admitted he was 'righting a wrong'. 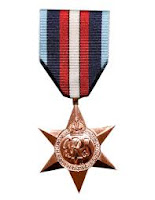 This week, 39 of the dwindling band of veterans returned to the Loch's shores to receive the belated medals. They gathered at Loch Ewe for a service to remember their lost colleagues who had perished in the freezing waters between 1941 and 1945 and lay poppy wreaths at a memorial as RAF jets performed a flypast in long-awaited acknowledgment of their courage.

Bert Glazebrook, 87, who sailed on two convoy missions on the destroyers HMS Serapis and HMS Walker, said:
" We got the medal for the ones who aren't here. Now we have got the medals I'm very pleased. Not just for me but for all my mates as well. We all went through hell. It was freezing cold, sleeping where you could when you have your duties to concentrate on, never knowing when it was our turn for a torpedo, but surrounded by your mates on a ship, we all just carried on. I got a little bit disillusioned while I was waiting for the medal, but today made up for it all."

Ron Leslie, 87, a member of the Fleet Air Arm, served on board the aircraft carriers HMS Vindex, HMS Campania and HMS Nairana and made various trips in support of a number of Arctic convoys said :
" Somebody one day said to me, "You are so brave going to Russia". I told them : " thank you, but there was more too it than that, we had to get back again. The enemies we had were not only German. There was the sea, the weather." 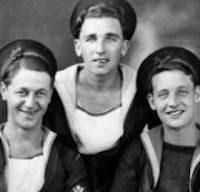 Bob Brighton, on the right in the photo and now 88, who joined the corvettee HMS Bamborough Castle, completed six convoys and experienced the horror of seeing allied vessels torpedoed, said :
" It is the end of the past and the beginning of the future today. It is recognition of something at last. These are my friends, and there is a lot more that have been gone. I have come here for the little celebration of ourselves."

Ivan Hall, 90, from Ludlow, Shropshire, who was a merchant seaman on SS St Clears and on one  of the first convoys in 1941 and wrote of his journey in a book entitled 'Christmas In Archangel' as his ship was icebound in the Russian port for six months said :

"It is very strange being back here. It's hard to describe the memories that come back, but I am just amazed we are regarded so highly and people want to remember what we did. It is very humbling. We just went out there and did what we had to do. When we got to the ice sea it was frozen over. So the icebreakers dragged us towards Archangel but we were frozen in. We were in a very grim place, but one of the sailors found a shop which sold musical instruments. So we made a band. I learnt to play the Russian Mandolin while I was there and we played some songs. I just found the instrument in my loft, it has been stored in there for about 70 years." 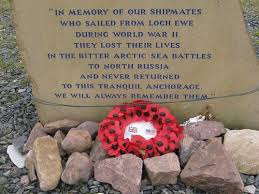 Men of the convoys :
http://www.russianarcticconvoymuseum.co.uk/wp/themenoftheconvoys/

My post in March on the men in the convoys :
Britain is finally a country for and recognises the heroism of the old men who once served in its Wartime Arctic convoys