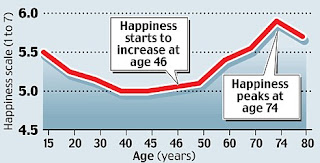 I am going to have to wait another 12 years because, according to scientists, we are most content only when we hit 74.
Apparently, a combination of fewer responsibilities and financial worries and having more time to yourself, produces a contentment unknown earlier in life.

Researchers have found that 'happiness' starts to dip in the teenage years and continues on a downward spiral until the age of 40. It then levels off until about 46, before rising to a peak more than 30 years later.

German and American scientists analysed the results of a 'long-term British survey' in which more than 21,000 men and women were regularly asked : 'how happy they were with their lives ?'

Slump: People in their twenties and thirties are handling the stresses of buying a house and bringing up a family and happiness hovered around this mark for the next few years, before taking an upturn around the age of 46.