Canada is a country for old men like Donald Sutherland 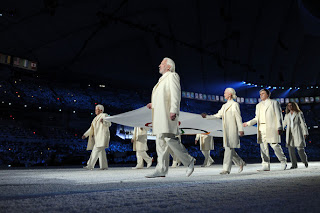 I watched the opening ceremony of the Winter Olympics at Vancouver which was spectacular. A feast of modern technology. I learnt that, like Donald, Joni Mitchell, the singer, is Canadian ; as is k.d.lang who sang a beautiful rendition of the Canadian, Leonard Cohen's 'Alleluia' or is it 'Halleluyah' ?

For me, the sight of 1.93m, Donald Sutherland, striding out with the Olympic flag, with 5 other bearers, to lay in front of the red coated police officers, was quite something, with his white beard, 75 years and mane of hair.

Jobs : Radio DJ in his youth
: Almost set on becoming an engineer after graduating from the University of Toronto with degrees in engineering and drama. He chose drama.

: His first roles were bit parts in films like : 'Dr. Terror's House of Horrors' in 1965 with Christopher Lee.

: He appeared in episodes of TV shows such as 'The Saint' and 'Court Martial'.

: First film break in which he played Vernon Pinkley in the Second World War film 'The Dirty Dozen' in 1967

: His second break was playing in the film 'MASH' in 1970 with Elliott Gould and Tom Skerritt.

: His next best film would have to be 'Klute' in 1971, which made Jane Fonda a star and was about a prostitute whose friend was mysteriously murdered.
http://www.youtube.com/watch?v=Jq8RATwKeAk

His commercial for the Olympics with his 'lilting' Canadian voice :