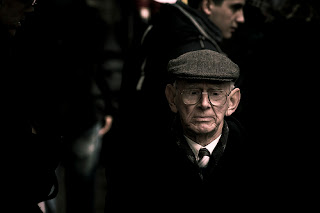 If you put 'Old People in Britain Today' on a 'Google' search, it produces a rich harvest of sad and depressing websites :

Survey finds 4% of older people in Britain are victims of abuse ...At least 340000 older people are being abused in their own homes by family, ... The first thorough survey of elder abuse in Britain found 4% of people over 66 are...http://www.guardian.co.uk/society/2007/jun/15/socialcare.longtermcare

Old people 'being robbed of will to live' by loneliness - This ...The NOP survey found that 72 per....
http://www.independent.co.uk/news/uk/this-britain/old-people-being-robbed-of-will-to-live-by-loneliness-565591.html

Elderly people's lives 'worsen'... More than one fifth of elderly people feel they are living in poverty and 28% say their lives have got worse.
http://news.bbc.co.uk/1/hi/uk/6747161.stm

Marginalised and depressed : One million older people in the UK..
http://www.ippr.org/pressreleases/?id=3215

The Decline of Employment Among Older People in Britain by N Campbell.
http://eprints.lse.ac.uk/6501/1/The_Decline_of_Employment_Among_Older_People_in_Britain.pdf

Who would want be a pensioner? The grim reality for millions of older people is a far cry from the ...
http://www.thisismoney.co.uk/pensions/article.html?in_article_id=431935∈_page_id=6