Britain is a country where old hippies revisit Matala on the island of Crete and dream of the time when they, Joni Mitchell and the World were young 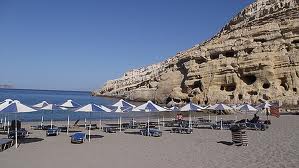 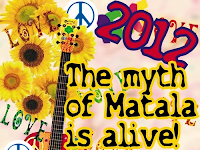 2012 :
The holiday resort of  Matala on the Greek island of Crete held a three-day music festival to recall its 'hippy' past at the beginning of June. The beach caves at Matala were a favourite haunt of them in the 1960s and 1970s and Matala has changed much since then. Nevertheless,there was a sharp rise in bookings at local hotels and the municipality provided a free camping area. The caves, believed to have been created in the Neolithic Age,  have been declared an important archaeological site and no longer accessible.
I am quite sure that estwhile hippies from Britain joined the ranks of others from around the world. Around 200 artists, Greek musicians and performers took part.

1967 : Greece had been taken over by the Junta of Army Generals and I was travelling round the Greek islands with my student friends, Kenny and Ann when we took a ferry to Crete and a bus to Matala. I remember that the best cave was occupied a big blond Dane who had been there for some time and could dive into the sea fom his door step. I spent one night in a cave, but slept badly in a hard stone recess and the rest of our time there in our tent on the beach. 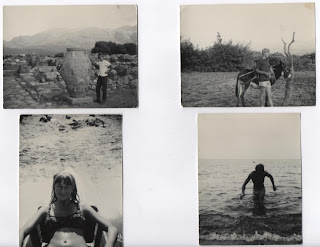 There were two restaurants on the beach. The one closest to the caves played a scratchy copy of Sergeant Pepper over and over again and was possibly the 'Dolphin Café'. The other was owned by, the always partially shaved, Leon and his wife Maria. Leon was not best pleased when we took an evening meal at the rival restaurant and to placate him I had to promise that, from that point on, we would take all meals with him. This pleased him greatly. He poured the wine and offered me a cigarette. From that point on, the quality of the food declined and on the last evening Leon served "Lamby" and that night Kenny was as sick as a dog which is not surprising since there are no sheep on Crete and we figured it was dog on our plates. 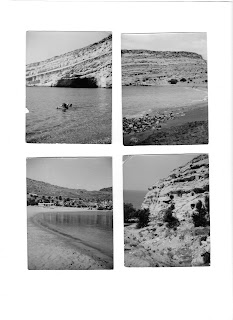 On the left I float in the bay and on the right  pose by a Minoan storage vase, Kenny poses by a donkey and Poseiden-like, rises fom the sea and Ann relaxes in a boat.

1970 : A young Joni Mitchell stayed at Matala and was inspired to write her song 'Carey' after 'Cary' or 'Carrot' Raditz, a cane-carrying chef with bright red hair, who she met there during her European Odyssey and referred to the village and Matala's now-defunct 'Dolphin Café' she called 'The Mermaid
Café'.
http://www.youtube.com/watch?v=fFGrRSVW8jk

Last night I couldn't sleep.
Oh, you know it sure is hard to leave here Carey,
But it's really not my home.
My fingernails are filthy, I got beach tar on my feet,
And I miss my clean white linen and my fancy French cologne.

Oh Carey get out your cane
And I'll put on some silver.
Oh you're a mean old Daddy, but I like you fine.
Come on down to the Mermaid Cafe and I will buy you a bottle of wine.
And we'll laugh and toast to nothing and smash our empty glasses down. 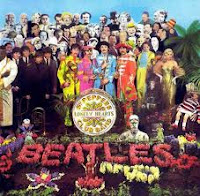 Maybe I'll go to Amsterdam,
Or maybe I'll go to Rome,
And rent me a grand piano and put some flowers 'round my room.
But let's not talk about fare-thee-welIs now,
The night is a starry dome.
And they're playin' that scratchy rock and roll,
Beneath the Matala Moon.

Come on, Carey, get out your cane
And I'll put on some silver.
You're a mean old Daddy, but I like you.
The wind is in from Africa,
Last night I couldn't sleep.
Oh, you know it sure is hard to leave here,
But, it's really not my home.

Maybe it's been too long a time,
Since I was scramblin' down in the street.
Now they got me used to that clean white linen,
And that fancy French cologne.

Oh Carey, get out your cane,
I'll put on my finest silver.
We'll go to the Mermaid Cafe,
Have fun tonight.
I said, Oh, you're a mean old Daddy, but you're out of sight.