Captain Polyakov has apparently had a 40-year career at sea, which puts him at least in his sixties and he looks as though it might be his late sixties.

What you almost certainly didn't know about Mikhail that he :

* began his sea life has taken him from novice sailor in a Soviet outpost to the helm of his decommissioned East German warship which for nearly eight months, has been impounded in the waters of Shoreham-by-Sea, West Sussex leaving him marooned on board after 'Independent Shipping', the British company which hired him, failed to pay a £32,000 fuel bill.

* had his ship, the 'Independent's served with an arrest notice in January by the Admiralty Marshal and cannot leave port and over the ensuing months has seen most of the nine-strong crew leave ship with no wages, some paying their own way home to Russia or Ukraine, leaving him alone on board, save the company of a  Ukrainian able seaman, Igor Aleynykov..

* is owed almost £18.000 in salary but is in good spirits and jokes that he has spent a year in British waters and will be able to marry an English woman and enter the country while his wife in Russia exists on her doctor's salary.

* without a full visa, is tied to the port with local 'Apostleship of the Seas' volunteers taking him to the shops and spends his days on board checking the ropes and tending the auxiliary engines and said : "I look after them as if [they were] a child."

* is troubled by the risk of fire

* on aboard his deteriorating ship, once Destroyer Number 41 in the navy of the former German Democratic Republic, is troubled by the risk of fire and the state of the ropes because when the 2,000-tonne ship strains at its mooring, there is a danger of it breaking free.

* had some back pay paid in March and another £5,000 in July, but chose to forward it to another member of his unpaid crew and said that : "I am absolutely sure : if I leave, I will never get my wages and my crewmen ashore will not."

Chris Grosscurth, General Manager of 'Independent Shipping' said : "We were struggling like any other normal company. It's a terrible situation but the best thing we can do is sell the ships."

John Green, Development Director of 'Apostleship of the Seas,' says: "We come across a lot of abandoned crews, but this is exceptional in the duration. When a firm is in trouble, the crew's wages are pretty much the first things to go. It's often difficult to put your finger on where the whole thing lies, but this affair just shows that the welfare of seafarers is precarious. Who's there for them?" 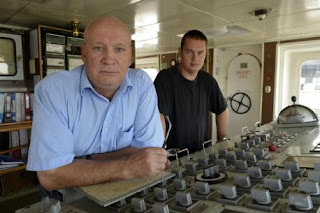 Labels: No country for Captain Polyakov