Britain is now, but for forty years, was no country for an old film director called Robin Hardy and a film called 'The Wicker Man'

I saw Robin Hardy's film, 'The Wicker Man', when it was released 40 years ago. It remains the creepiest film I have ever seen. Written by Anthony Shaffer, the story centres on the visit of Police Sergeant Neil Howie to the isolated island of Summerisle in search of a missing girl the locals claim never existed. Howie, a devout Christian, is appalled to find that the inhabitants of the island practise a form of Celtic paganism. The film title is taken from the large wicker statue of a man, once used by the ancient druid priests for human sacrifice by fire and burning and reserved in the film for the good sergeant. 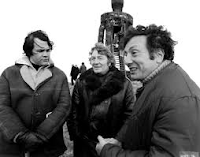 What you possible didn't know about the 84 year old Robin, seen here on the right on location with Anthony Shaffer in the centre, that :

* his film has been almost fully restored to its original length after it had been ignominiously cut to form a B-feature below Nicolas Roeg's 'Don't Look Now'.
https://www.youtube.com/watch?v=yXFYU3v-wL4

* in 2004 saw the film magazine, 'Cinefantastique' describe his film as : 'The 'Citizen Kane' of horror movies' and during the Summer Olympics Opening Ceremony London 2012 saw it included as part of a sequence that celebrated British cinema.

*  in 2006, disassociated himself from the ill-received  American remake starring Nicholas Cage.


* has directed 3 films in the 40 years since the release of The Wicker Man.

Clips from the film :

Sergeant Howie meets the islanders in the pub :
https://www.youtube.com/watch?v=Gsaep-xLKG4

" I think I could turn and live with animals. They are so placid and self-contained. They do not lie awake in the dark and weep for their sins. They do not make me sick discussing their duty to God. Not one of them kneels to another or to his own kind that lived thousands of years ago. Not one of them is respectable or unhappy, all over the earth." - Lord Summerisle

Labels: Now a country for Robin Hardy and Wicker man