Britain is no longer a country for and says "Goodbye" to and old Second World War Welsh codebreaker called David Rees. 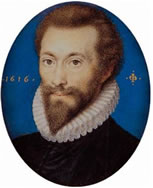 The English poet, John Donne, wrote. 'For Who the Bell Tolls', 389 years ago at the age of 52 and 7 years before his death in 1624. It appears in 'Devotions upon emergent occasions and seuerall steps in my sicknes - Meditation XVII.'

No man is an island,
Entire of itself.
Every man is a piece of the continent,
A part of the main.
If a clod be washed away by the sea,
Europe is the less.
As well as if a promontory were.
As well as if a manor of thy friend's
Or of thine own were:Any man's death diminishes me,
Because I am involved in mankind.And therefore never send to know for whom the bell tolls;
It tolls for thee.

So when an old Brit dies, a little bit of all of us dies and David Lees, who most people have never heard of, was such an old Brit.

David, who was one of these old Brits, has died aged 95, after a distinguished academic career as a mathematician,

What you almost certainly didn't know about David, that he :

* was born  the fourth of five children in Abergavenny, Monmouthsire in Wales and went to King Henry VIII Grammar School and, despite the fact that he was absent for some months during his early teenage years, left to study mathematics at Sidney Sussex College, Cambridge where he was supervised by Gordon Welchman and gained a very good first-class degree.

.* was 21 and a few months into his postgraduate work, when the Second World War broke out in September 1939 and was recruited by Welchman to work at Bletchley Park, the British codebreaking centre in Buckinghamshire.

* worked in 'Hut 6' in a team with other young mathematicians from Cambridge and at the same time after inspiration from "wonderful lectures" at Cambridge by Philip Hall on the algebraic structures known as semigroups, published his first paper in 1940, containing what is now known as 'the Rees theorem'. 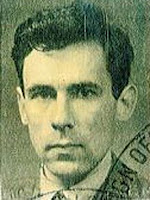 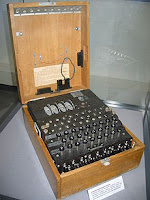 * used a tip by John Herivel, another of Welchman's recruits from Sidney Sussex College, that when working the Enigma ciphers some German operators might use short cuts that could be exploited to break the Germen Enigma ciphers for some critical months in the War, from May 1940 revealing details of the enemy war plans.

* was working on his own on the night shift in the Machine Room and noticed that among the many Enigma messages there were several that were very close together, tried out various possibilities and, as the day shift came in, finally managed to break into the code.

* after the War, became an assistant lecturer in mathematics at Manchester University, under MH Newman. who during the War had been in charge of the department, the 'Newmanry' at Bletchley Park, for which the the world’s first working electronic computer, 'Colossus' (left), was constructed, to help with codebreaking.

. * at Manchester, continued to work on semigroups and in 1948, at the age of 30, was appointed to a lectureship at Cambridge and a fellowship at Downing College and saw his life change dramatically following a working seminar, on
Andre Weil's book, 'The Foundations of Algebraic Geometry', which inspired him to become a commutative algebraist and where he met his future wife, Joan Cushon, who he married in 1952.

* worked as an expert in commutative algebra, loosely described as 'the algebra underlying the equations used to define curves, surfaces and higher-dimensional geometric objects' and introduced the important concept of 'reduction of an ideal'.

* left Cambridge in 1958 to take up a chair at Exeter University, where he remained until his retirement in 1983, then had another burst of research and was awarded the Pólya Prize of the London Mathematical Society in 1993.

* remarked in 2000 that "the Herivel tip was one of the seminal discoveries of the Second World War" and thought that Herivel should have received more credit, reflecting on the codebreaking breakthrough which had generated roars of excitement in Hut 6 back in 1940 and had to be kept secret for at least 40 years.

* had several mathematical concepts named after him and left a lasting legacy to commutative algebra.

It didn't surprise me to find that the buildings at Bletchley Park had been allowed to fall into disrepair as the importance of what the men and women who worked there was forgotten :
BBC article on the neglect of Bletchley Park : http://news.bbc.co.uk/1/hi/technology/7517874.stm

David at Bletchley and number '14' 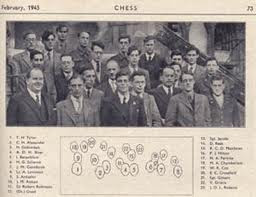