Britain is no longer a country for and said "Farewell" today to that old, illustrious, tv interviewer of 'the great and the good', David Frost 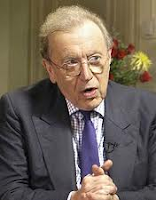 *  was born in Tenterden, Kent in 1939, five months before the outbreak of the Second World War, the son of a Methodist minister and his wife, Mona and was brought up with two elder sisters.

* moved with the family to Gillingham, Kent, closer to his Father's Methodist chapel in Byron Road and went to Barnsole Road Junior School, which my two children would attend some thirty years later and then Gillingham Grammar School for Boys', where, I was later told by the then Deputy Head Master, David Parsons, that he was an "unremarkable boy".

* was taught in Bible class at his Father's chapel and subsequently started, but did not complete his training as a local methodist preacher. 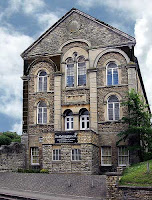 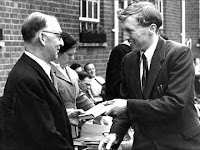 * moved with the family again when his father took up a post at Raunds ( left), studied at Wellingborough Grammar School where he received a prize from Nobel Prize winner, Sir John Cockcroft.

* was a keen football player, offered a contract with Nottingham Football Club, but instead went to study for an English degree at Caius College Cambridge, where he was editor of both the student newspaper, 'Varsity' and the literary magazine, 'Granta' and secretary of the 'Footlights Drama Society', which included Peter Cook and John Bird.

* left university and working for Anglia Television, was chosen by writer and producer Ned Sherin to host the pioneering satirical programme, 'That Was The Week That Was'
https://www.youtube.com/watch?v=6uyl3eVIClc with brilliant sketches by the talented team which caught the anti-establishment mood of the baby boomers in the 1960's.

* is the only person to have interviewed eight British Prime Ministers serving between 1964 and 2010 and the seven US presidents in office between 1969 and 2008 and was also the last person to interview the last Shah of Iran.

* when asked in 2008 : why towards the end of his life he was still working at a frenetic pace ? He replied : " People might refer to my Methodist background - that feeling of doing something you enjoy and believe in. That's the ideal. Then you can be pretty much genuine all the time."

His interview with her in 1985 and his questions over her order to sink the Argentinian battleship, the 'Belgrano' in the Falklands War : http://www.youtube.com/watch?v=1aZdAyHVjzQ