Britain is no country for old soldiers, Captain Joe Eastwood and Colonel Ian Brazier and a battalion called the Royal Regiment of Fusiliers

The Defence Secretary, Philip Hammond was interrupted during his Conservative Conference speech yesterday by 76 year old Captain Joe Eastwood and 59 year old, Colonel Ian Brazier and , who both served in The Royal Regiment of Fusiliers.
http://www.youtube.com/watch?v=5K45zmpPFYc

The Minister asked the two old soldiers to let him finish his speech as the Colonel shouted:  "

Tell the truth about the disbandment of the Fusiliers. I write you letters, you don't respond. The public must know the truth - the Fusiliers are loyal soldiers, you have betrayed them. Sir, you need to be looking at defence. This is denial, not defence. You're a disgrace."

The Colonel and the Captain were then escorted out of the Conference hall by security.

Outside the main hall to reporters, the good Colonel, Chairman of the Fusiliers Association, said he was speaking on "behalf of all retired fusiliers. I am very angry about the fact the 2nd Battalion, the Royal Regiment of Fusiliers is to be disbanded."

Minister Hammond said the decision was made by the Army :
"If they'd stayed in the hall a bit longer they would have heard the case that I was building in my speech for why we have to invest in the new capabilities we need to defend Britain. While we all cherish our military traditions - and we have great regiments with proud histories - we have to reduce the size of our conventional armed forces as we are investing for example in new cyber. The Army has made the decision about how it needs to restructure to be able to defend Britain in the future with a smaller army than we've had in the past. These two RRF guys - the campaign's been long running - they know very well the point that we are making."

The Colonel said :
"It's our battalion, thousands of soldiers. Your battalion because if you live in Manchester or Birmingham we've been recruiting there for 300 years. We're not some passing fantasy - 1674 our regiment started proudly and has served its country through generation after generation." 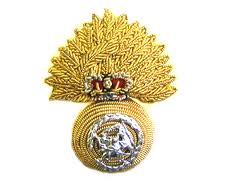 Labels: No country for the Royal Regiment of Fusiliers