David still working as a hospital consultant, Oliver, and the Government’s former 'Older People’s Tsar', this week takes over as President of the British Geriatrics Society.

Ageism rankles with Oliver: “My concern is that often older people with perfectly treatable problems get written off. I’m not saying all health professionals are ageist, but endemically across health and care services the attitude of professionals reflects that of society. We live in a society that doesn’t value age and that only respects old people who can look and behave like young people – sky-diving grannies, marathon-running granddads."

He is frank about the challenges posed by Britain's ageing population ,with more and more old men and women living longer and longer. He points out that when the National Health Service was founded in 1948, 48% of people died before they were 65; now only 14% do and the 'oldest old, the over 80s, are the fastest growing section of society. In his opinion : "It represents is a victory for better nutrition, better housing, better societal conditions and a better Welfare State and also a victory for modern health care.”

David feels that Britain should stop talking about ‘tsunamis’ of old people and additional ‘burdens’ since "that just engenders ageist attitudes. We’ve got to move towards thinking about healthy active ageing across the life course, not regarding anyone over 65 or 70 as miserable, isolated and a burden.”

So old men and women of Britain, "Take Heart" David is about to take up the cudgels on your behalf : “I love the idea of crusading for a disadvantaged group. That campaigning edge is something the British Geriatrics Society is looking to build on. It has already moved from being a somewhat inward-facing 'club for doctors' to one that is aiming to influence policy and attracting more non-doctors, including therapists and nurses, to its 3,000-strong ranks."

David will have his work cut out for him because, in his opinion :

* radical action is needed on a number of fronts to avoid our health and social care services being completely overwhelmed by more and more old people : “Doing nothing is not an option any more. Our systems are about to fall over with the rising pressure.” 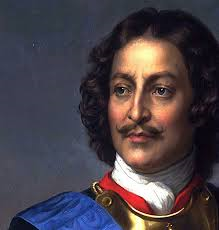 * the main political parties are not prepared because : “The conference announcements from all three parties about funding for health and social care are too little, too late – they are a sticking plaster. None of them are committing to anything near the level of funding increase we really need, let alone being honest about where that’s going to come from.”


Throughout Britain old men and women wish David success in his crusade, while some might reflect on another Tsar, Peter the Great, who tried to modernise Russia in the 18th century and received the comment : "The Tsar of Russia pulls uphill with the strength of ten, but millions pull downhill."
Posted by ...............................JohnBoy at 10:07