If Britain is no Country for old men, Norway certainly is one

The 2014 Global AgeWatch Index of 96 nations has been published and confirms that Norway is 'the best country in the world in which to grow old' in 'quality of life' ranking. It was followed closely in Europe by Sweden, Switzerland and Germany.

Old men and women in Britain are ranked :

* 23rd for EDUCATION and EMPLOYMENT, behind Bolivia (left), Estonia and the Philippines

Norway was praised for its :

* over-60s employment. Britain has many over-60s in employment because they are too poor to retire.

* political representation with its 'National Council for Senior Citizens'. Britain has no Council, but separate pressure groups, like 'Age UK'.

* its good health system funded by high taxation. Britain's National Health Service is in crisis due to Government underfunding and the policy on taxation has been to 'keep it low'.

* ‘The UK ranks at 11 overall in the index and is relatively well placed on all domains when we compare the country against countries with a similar GDP apart from its health status where it is ranked at 27. There is clearly room for improvement and the UK should aspire to do better.'

* 'The UK has a vastly underfunded social care system which is having a devastating impact on frail older people and their families..We need to look beyond someone’s age and strive for a society where people of all ages are valued equally and everyone is supported to achieve the best health and wellbeing outcomes they can.'

* 'Loneliness is also a huge issue with nearly half of people aged 65 and over (49%) living alone and this is expected to increase because of changing demographic and family patterns. Only when these issues have been addressed can the country be really proud about how it treats its older population and it can be a great place to grow old.’ 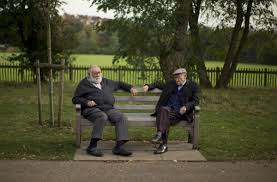