Is Britain still a country worthy of an old and great humanitarian called Nicholas Winton ?

It is ironic that one item of news today was that 105 year old Nicholas Winton, flew to the Czech Republic to receive the country's highest honour, the 'White Lion', in recognition of his saving, though his 'kindertransport', 700 Jewish children from certain death under the Nazis in 1939. Another item was the announcement by the Foreign Office that Britain will not support any future search and rescue operations to prevent migrants and refugees from North Africa drowning in the Mediterranean, with the claim that they encourage more people to attempt the dangerous sea crossing,

So on the day that the selfless, fearless, humanitarian actions 75 years ago, of a great, old Briton are recognised and revered, the self-interested, timid, lacking-in-humanity actions of today's British politicians are revealed.

British policy was quietly spelled out in a House of Lords written answer by the new Foreign Office Minister, Lady Anelay:
'We do not support planned search and rescue operations in the Mediterranean' because there was 'an unintended ‘pull factor’, encouraging more migrants to attempt the dangerous sea crossing and thereby leading to more tragic and unnecessary deaths.'
Does the Baroness really believe that those fleeing from hunger and persecution, often mothers and fathers with their children, will think twice about making the perilous crossing across the Mediterranean because they are less likely to be rescued at sea? Over a thousand have drowned already, many of them children and with absolute certainty, many more will also die.

The facts are : that the Italian sea and rescue operation, operation, 'Mare Nostrum', is due to end this week after contributing over the past 12 months to the rescue of an estimated 150,000 people since the Lampedusa tragedies in which 500 migrants died in October 2013. It will now end without a similar European search and rescue operation to replace it. The Italian authorities have said their operation, which involves a significant part of the Italian navy, is unsustainable. Despite its best efforts, more than 2,500 people are known to have drowned or gone missing in the Mediterranean since the start of the year.

Instead of the Italian operation, a limited joint EU 'Border Protection' operation, codenamed, 'Triton' and managed by Frontex, the European border agency, is to be launched on November 1st. Crucially, it will not include search and rescue operations across the Mediterranean, just patrols within 30 miles of the Italian coast. The Home Office has said that it was not taking part in Operation Triton at present beyond providing one 'debriefer' – a single immigration officer – to gather intelligence about the migrants who continue to make the dangerous journey to Italy.

* was born in 1909 in Hampstead, London, a son of German Jewish parents called 'Wertheim',who had taken the name 'Winton' and converted to Christianity and at the age of 14 in 1923, went to the newly-opened Stowe School and on leaving worked for Midland Bank, then went to Hamburg and worked at Behrens Bank, followed by Wasserman Bank in Berlin.

* in 1931, at the age of 22, moved to France and worked for the Banque Nationale de Crédit in Paris and then returned to London and became a broker at the Stock Exchange. 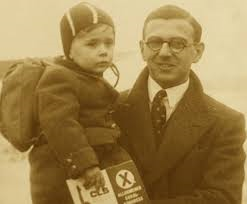 * before Christmas 1938, was planning to travel to Switzerland for a skiing holiday, but decided instead to visit Prague to help his friend, Martin Blake, who had called to ask him to assist in Jewish welfare work.

* set about, single-handedly, to set up an organisation to help children from Jewish families at risk from the Nazis, setting up his office at a dining room table in his hotel in Wenceslas Square.

* found his plans eased after 'Kristallnacht' in Nazi-ruled Germany http://ow.ly/Du9VI  when the House of Commons approved a measure to allow the entry into Britain of refugees younger than 17, provided they had a place to stay and a warranty of £50 was deposited for their eventual return to their own country, but still had to overcome the obstacle of getting official permission for the children to cross into the Netherlands, where the Dutch Government had officially closed its borders to any Jewish refugees

* found homes in Britain for 669 children, many of whose parents perished in Auschwtz, with his mother working with him throughout the Summer of 1939, partly by placing  advertisements seeking families to accept them.

* served in the Royal Air Force during the War and kept quiet about his humanitarian exploits for many years, until his wife Grete found, in his 79th year, a detailed scrapbook in their attic in 1988. 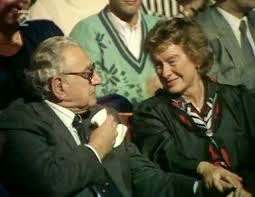 * in the same year, featured in an episode of the BBC television programme , 'That's Life', during which the host of the programme, Esther Rantzen asked whether any in the audience owed their lives to him ? and, if so, to stand, at which point more than two dozen people surrounding him rose and applauded.
http://www.youtube.com/watch?v=6_nFuJAF5F0

Labels: No country for Nicholas Winton