Britain is a country with a Conservative Party, no longer a place for decent old-school Tories 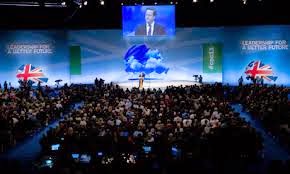 An article by Polly Toynbee in the Guardian yesterday had the sub heading :
Cameron has sacked the last of the decent old school the push to the Europhobic right is relentless

Reporting on the Conservative Party Conference in Birmingham, she noted that : 'The Conservative party or its leadership are not being reluctantly dragged rightwards. They are boldly going into the blue yonder, because that’s where their yearnings take them.'

She reflected on the time when : 'Once the Tories were a blend of wets and dries, with a realism about how far they could go. But this party has lost its automatic stabilisers. Cameron has sacked the last decent old-school Tories, thoughtful, experienced and free of the euro-virus.'

She chose three 58 year olds to illustrate her point :

* 'Away went David Willetts who funded social research because he believed in evidence.'

* 'Sacked was Damian Green, who made a thumping speech: “At all costs, at all times resist the temptation to become Ukip-lite.” But he was addressing a beleaguered little pro-European fringe.'

and also a 74 year old :  'Away went Ken Clarke, still warning that appeasing the sceptics is like “feeding crocodiles”.'

Polly said, however, that : 'You can find plenty of reminders at Conference in Birmingham of a better Tory party, but they’re older and away from the cameras. Talk to David Hodge, 69-year-old leader of Surrey County Council, and you would never guess he belonged to the party of Cameron and Osborne.' 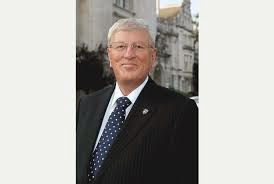 Polly was clearly impressed by David, who brought up in an orphanage, spoke 'emotionally of people’s needs, not of us and them. “That’s what I’m in politics for. None of us know when we’ll suddenly be in need, have an accident, end up in a wheelchair, I never forget that,” But, he says, “our voice is not heard”.'
She saw David as an example of 'old-fashioned decent Toryism among councillors struggling with the impact of Osborne austerity on their doorstep, their budgets next year no longer covering the basics. But none of those local voices are allowed on the conference platform. Up there, everyone is ratcheting rightwards.'

David was an old-style Tory hero who 'defies Tory high command on tax: he has raised council tax 2% every year: “I’d have £32bn less if I hadn’t.”' and who 'wants freedom to tax, to borrow and build homes' and said : “We have poverty here too and we pick up the effect of welfare cuts that have hit people hard. We have food banks and a tougher cap will hit Surrey people with high rents.”

Closer inspection of David's record in Surrey, however, reveals that he is not quite the old-fashioned decent Tory Polly would have us believe. In fact, his behaviour has all the hall marks of a younger, self-interested Conservative. Just two months ago the 'Surrey Mirror' reported :

Apparently, David made a U-turn on his original decision to award himself and his Deputy an increase which would have taken his allowance from £27,000 to £43,000 and thus ignoring a lower level recommendation of £35,546, by an independent pay panel. This panel resigned in protest with the chairperson saying that the "flagrant disregard" of their proposal left them with no alternative.

In addition to this the Council's Chief Executive was on a salary of more than £200,000 and 15 other staff members were earning in excess of £100,000 yet David opposed a Council resolution to give its most poorly paid workers the 'living wage' of £7.65 per hour.

Rochdale Labour MP, Simon Danczuk asked David : "Why would you oppose giving the poorest paid workers a living wage and yet increase you own salary by 60% and give a load of cash to the Chief Officers ?"

It forced Local Government Minister, Brandon Lewis to intervene saying that the authority was “showing contempt for hard-working families” by voting through massive pay increases. David's change of mind meant that he is now receiving £47,966 rather than the £55,418 he awarded himself.

Labels: David Hodge and the loss of old Toryism