Britain is no longer a country for and says "Goodbye" to an old pilgrim Professor of Philosophy called A.H.Halsey

Albert Henry or 'Chelly' as he was known to his family, who has died aged 91, was Britain’s first 'Professor of Sociology' and played a key part in the 1960s, as adviser to Anthony Crosland, the Labour education secretary, in the switch to comprehensive education and in the process, indirectly affected the lives of millions of boys and girls.

What you possibly didn't know about Chelly, that he :

* was born in Kentish Town, London in 1923, the second of eight children in a poverty-stricken family, with his Mother and Father 'firmly placed in the perverse tail of the distribution which still dogged the fortunes of the manual labourers and placed fertility in inverse relation to family income – the lunatic system of he 19th century.'

* when he was 3, was taken, with the family, to Rutland because his father, a railway porter on the London, Midland and Scottish Railway, was so ill from First World War gas wounds, was sent to the country to work and regain his health as a porter-signalman at a whistle-stop before moving to a council estate at Corby, Northamptonshire.

* later remembered : "My father gardened assiduously behind the council house and his allotment; the woods and fields were ours for foraging . There were regular seasonal outings to bring in mushrooms and blackberries as well as irregular raids on the swedes and apples grown on local farms. We were, moreover, allied to the poaching faction of the village. Rabbits galore as well as pheasant and partridge and venison and hare, were often delivered to the back door."

* at the age of 11, won the local 'Rowlett Scholarship', which paid for his cap and blazer at, and travel to, Kettering Grammar School where in rugby he always played 'stand off half', the 'playmaker' who read the game quickly, seized openings and opportunities, then linked with other players who could take these forward, a skill he used later in academic life where a colleague commented that he 'seemed to have read books before they were published' and arriving at conferences 'seemed to have absorbed what had already been covered by other speakers.'

* intended to stay on in the sixth form to take the exams for the clerical grade of the Civil Service, but left school aged 16, when these were cancelled in 1939 on the outbreak of the Second World War and worked as a 'apprentice sanitary inspector' on a wage of £40 a year.

* carried vivid and formative memories of family life with him : the tramp who appeared at the kitchen window and stretched out his billy-can and his Mother, who had been a skivvy and cook’s assistant after she left school at 13, who gave him tea and two thick slices of bread and dripping and when he said :“God bless you, Missus,” she replied in her London cockney tones : “Good luck to you, mate” and formed his puritanical attitudes to work and leisure and confessed that his manual working uncles "always haunt me, investing the stint with sacred quality.”

* on his 18th birthday in 1941, volunteered for active service, in the War and entered the RAF as a pilot cadet, trained as a fighter pilot in Rhodesia and South Africa, saw no active service, but almost lost his life practising the 'aerial handbrake' when his plane nosedived and recovered only yards from the ground and by the time the War ended, was a flight sergeant in the RAF Medical Corps.

* unlearned his attitude to university as, ‘not for the likes of us’ and was spurred to apply when he noticed fellow cadets from independent schools were a lot slower than him learning the theory of flight, yet were already planning to go on to Oxford or Cambridge after the War and after demob, at first trained for teaching at Westminster College, then transferred to the London School of Economics, where he took an Economics degree, specialising in sociology and where he met Margaret Littler, a fellow student and his future wife.

* in 1951, with a close-knit group of a dozen researchers formed the 'British Sociological Association', graduated at the age of 29 in 1952 and was taken on by Jean Floud for her ground breaking research at the LSE on secondary education, at the same time took a research post at Liverpool University until 1954, then lectured at Birmingham University until the age of 33 in 1956. 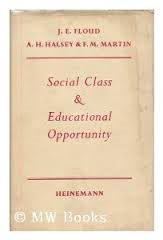 * published his and Jean's, 'Social Class and Educational Opportunity', in which they explored the relationship between social class and success at 11-plus and concluded that working-class children were disadvantaged by the selective system and so provided the academic underpinning for the Labour Party’s early commitment to comprehensive education.

* in 1962 left Birmingham as senior lecturer to become Head of Barnett House, Oxford University’s Department of Social and Administrative Studies and a professorial fellow of Nuffield College and fought successfully to establish sociology as part of the academic mainstream.

* in 1965, was appointed 'Adviser on Education' to Tony Crosland in Harold Wilson's first Labour Government, but found him a disappointing minister who, in his opinion, ducked the important decisions that needed to be taken, like abolishing the public schools and found it was only his commitment to comprehensive education that enabled him to overcome his distaste for the man himself  who he saw as “a profligate drinker and philanderer… alcohol, cigars, women, even opera were avidly consumed.”

* after Crosland’s departure in 1967, found himself cold-shouldered by his successors : Patrick Gordon Walker, who  made him feel like “Charlie Chaplin in City Lights where a toff would get drunk and take Charlie home, swearing eternal comradeship, and then have him thrown out in the morning as a person unknown”, Ted Short who was “not much better” and Shirley Williams, who "ignored him completely", but had more success when the research he undertook with Ivor Crewe for the Fulton Committee on Reforming the Civil Service was published in its 1969 Report.

* was called upon by Mrs Thatcher, in her role as Education Minister, in Ted Heath's Government in the early 1970s, to advise on nursery education, but found she didn't act on his recommendations that more money should be poured into deprived 'educational priority areas' and nursery education.

* in 1974, provoked widespread ridicule when he appealed to parents to remove their children from public schools on the ground that they were contributing to the deprivation of disadvantaged children, but remained undeflected and maintained his intellectual output in 1976 with 'Traditions of Social Policy', a collection on the development of sociology and social work in Britain and the following year was the BBC’s choice for its prestigious Reith Lecture entitled 'Change in British Society' : http://www.bbc.co.uk/programmes/p00gq29j * in his 'Origins and Destinations: Family, Class and Education in Modern Britain' in 1980, explored the 'political arithmetic' of how educational expansion had affected life chances and social mobility and emerged as one of the main opponents of Mrs Thatcher’s Government, being given an honorary degree by Oxford, arguing that the university should
“stand up for education against its principal oppressor” while at the same time, hated the extremists in the Labour Party and disliked the breakaway Social Democrats even more (left), dismissing them as “middle-class Oxbridge intellectuals” whose party allegiance “did not come from childhood experience of the daily struggle that informed the politics of my own kith and kin”.

* a committed Anglican in religion, was a contributor to 'Faith in the City' in 1985, the report on urban problems by the Archbishop of Canterbury's Commission which was dismissed by Conservatives as 'little better than socialist propaganda.'

* after his retirement at the age of 67 in 1990, found common cause with thinkers on the Right and in his, 'Families without Fatherhood', published in 1992 by the Right-wing 'Institute for Economic Affairs', drew attention to the link between crime and family breakdown, harking back to 'respectable' working-class family life just before and after the Second World War, when the heart of the family was stable marriage, which anchored men into the child-rearing process.

* also in 1992 took issue with he way in which women had been betrayed by feminist demands for equality, thinking, as he did, that they were now worse off than at any time since the suffragette movement because they were combining the role of breadwinner with mother.

* true to his ideals, in 1993, when diagnosed as needing immediate surgery for an aortic aneurysm, found this was delayed three times because of the shortage of intensive care beds, did not consider the possibility of private treatment and spent the perilous waiting time writing letters of protest to the Minister of Health and his local MP.

* was profoundly sceptical of 'New Labour' and later recalled an exchange with the aspirant Prime Minister, Tony Blair, over dinner in 1995 who suddenly asked : 'who was the second most interesting character in the New Testament ?' and

did not disguise his disapproval of Blair's own answer, 'Pontius Pilate' which he thought a 'characteristic politician’s choice' and offered his own choice, the 'Good Samaritan' as 'a member of a despised minority engaged in direct action' to which Blair immediately backtracked, remarking that, naturally, the 'last person he would try to emulate in power would be Pilate.'

* in 1996, chose 'No Discouragement' as the title for his autobiography taken from Bunyan's 1684. 'Pilgrim's Progress' :
'There's no discouragement shall make him once relent
His first avowed intent to be a pilgrim'
and as a pilgrim, had believed that 'the institutions invented by the Victorian and Edwardian working class — the Unions, the Cooperative Society and the Labour Party — were the route to the New Jerusalem'.

* at the age of 77 in 2000 in an introduction to 'Twentieth-Century British Social Trends', evoked some of those qualities he missed so much, approvingly quoting George Orwell: 'The crowds in the big towns, with their mild knobby faces, their bad teeth and gentle manners.'

* in 2003 was the castaway on the radio programme. 'Desert Island Discs' with Sue Lawley and chose Marie Lloyd singing 'Don't Dilly Dally On the Way' in memory of his old, cockney Mum : http://ow.ly/CZLnH

* at the age of 89 in 2012, in the introduction to his 'Essays on the Evolution of Oxford and Nuffield College' made the plea that : 'social policy has to be directed not only to maximising GNP but to securing the wellbeing of individuals in a secure society. Herein lies the modern challenge: to social science, for a complex research programme aimed at solving the age-old problem of social inequality; and to politics, to discover the means to reach such a noble goal.'

* throughout his life was an "unrepentant ethical socialist" in the line of descent from William Morris and RH Tawney who believed in "new freedom and new justice built on ancient solidarity".

* sent his five children to comprehensive schools and once said:
"I hate hypocrisy, pomposity, the man who says he's a socialist and sends his son to Eton. You have to behave as if the revolution was here. That's how it will happen."

P.S. Two other intellectuals with working class origins who died this year :