Boisterous Brian, known for his hearty, king-sized portrayals on film and television, a giant of a man with an eloquent wit and booming, operatic voice, is 78 years old today.

* was born in 1936, before the Second World War, grew up in the mining village of Goldthorpe in South Yorkshire,.the son of a coal miner, went to Bolton on Dearne Secondary Modern School where he displayed a talent for acting and a penchant for boxing, but was forced to leave at the age of 14 when his father suffered an accident at work and he had to support the family. http://ow.ly/CvcA2

* later recalled that at school he was inspired by Mrs Brown, the Headmaster's wife who : 'taught us about Albert Einstein and read to us from Shakespeare, Shaw, Masefield, Keats and Wordsworth. Tears ran down her cheeks as she told of the wanderings of Odysseus, and described his yearnings and his loneliness. She was brilliant' and his English master, Mr Jones, who, after he left school : 'was instrumental in furthering my education...taught me in the evenings and at weekends, and when I joined the Mexborough Amateur Dramatic Society and played Bramwell in 'The Bront s of Haworth Parsonage', he came and made me up.'

* worked in a number of jobs, ranging from an undertaker to a plasterer's assistant before doing his National Service as a parachutist in the Royal Air Force in 1954 and then started drama training at the Bristol Old Vic Theatre School where a contemporary was Patrick Stewart.

* at the age of 26 in 1962, played P.C. Fancy Smith in the BBC police series, 'Z Cars' http://ow.ly/CvlkV  and continued to do so for thee years, then appeared on stage in a production of 'Incident at Vichy' at the Phoenix Theatre followed by minor roles in cult tv series, 'The Avengers' and 'Randall and Hopkirk (Deceased)' in the late '60's. 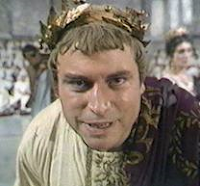 * after playing the Emperor Augustus in BBC TV's 'I Claudius' at the age of  40 in 1976 http://ow.ly/Cvo7J
hosted a docu-drama on the life of Johann Sebastian Bach, 'The Joy of Bach' in 1978 http://ow.ly/CvozP
in which he played Bach in a number of scenes and then Basileos in 'The Aphrodite Inheritance' in 1979.

* in 1980 played Prince Vultan in the film 'Flash Gordon', remembered for the exclamations "Gordon's alive!" and "DIVE!. 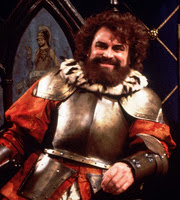 * on tv played the mad, comic figure of Richard IV in the first series of 'The Black Adder' in 1983  http://ow.ly/CvqWK

and Spiro in the BBC adaptation of 'My Family and Other Animals' in 1987.

* played General Yevlenko in the mini-series, 'War and Remembrance' in 1988 and Lord Loxley, the father of Robin Hood, in the film 'Robin Hood : Prince of Thieves' in 1991 at the age of 55.

*  attempted to climb to the summit of Mount Everest three times, attaining heights of 8,600 metres in 1993 and 7,700 in 1996 at the age of 60 and has climbed Mount Aconcagua in Argentina and Kilimanjaro in Tanzania and is the oldest man to trek to the North Pole on foot and has undertaken an expedition into the jungles of Venezuala during which he survived a plane crash.

* has appeared in a number of Shakespearean roles on stage and screen, including four of the five Shakespeare films directed by Kenneth Branagh. 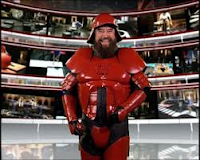 *  since 2008, has presented the English-language dub of the Japanese TV game show 'Unbeatable Banzuke' under the pseudonym 'Banzuke Brian'. http://vimeo.com/16028876

* in August this year, featured in an episode of the BBC genealogical series 'Who Do You Think You Are' : http://ow.ly/CvuXJ and tracked down his ancestors, the Blesseds.

* has said : "I've just been blessed with a colossal love of life and love of people. I give in to it and let it take me over. I sleep like a log and I can't wait to get up in the morning - whatever the weather. I feel this lifeforce all the time and it even catches me out at times and I find myself laughing at myself."