What you possibly didn't know about Angharad who has tragically died of pancreatic cancer at the age of 63, that she :

*  was born in London, the daughter of a distinguished Welsh psychiatrist, Linford Redes and his wife, Catherine and as a baby moved with the family back to Wales to live in Cardiff.

* in the mid-1960s, gained experience as an assistant stage manager and actor at the West Cliff theatre, in Clacton-on-Sea, Essex.

* made her screen debut in 1968, as the parlourmaid in a BBC television adaptation of George Bernard Shaw's 'Man and Superman' and had one-off parts in TV dramas and comedies including 'The Avengers' in 1968 and 'Doctor in the House' in 1969. 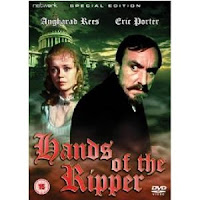 * played Jack the Ripper's murderous daughter in the Hammer horror film 'Hands of the Ripper' in 1971 http://www.youtube.com/watch?v=-kTEVVMXxM0 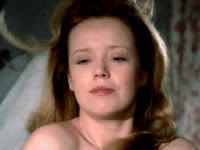 *  appeared as 'Gossamer Beynon', (right) alongside Richard Burton, Elizabeth Taylor and Peter O'Toole, in Under Milk Wood' in 1972.
http://www.youtube.com/watch?v=g3VJmQZ3l_I

* played Sarah Churchill, the daughter of the Wartime Prime Minister, Winston Churchill, played by Burton in 'The Gathering Storm' tv series in 1974, Celia in a 1978 production of  'As You Like It', opposite Helen Mirren http://www.youtube.com/watch?v=sfUCj_BJHcU
and guest-starred in ''The Morecambe and Wise Christmas Show' in 1977.

* soared to fame in 'Poldark' (1975-77), the BBC's dramatisation of Winston Graham's  novels set in 18th-century Cornwall,  playing the fiery servant 'Demelza', whose beautiful smile, wide-open eyes, flowing red locks and headstrong nature won over the brooding hero and helped to attract 15 million viewers in Britain and many more around the world.
http://www.youtube.com/watch?v=oMYp7v3-rBA

* as Lady Evelyn Herbert, teamed up with Robin Ellis again in the tv film, 'The Curse of King Tut's Tomb' in 1980 and starred as the remarried former wife of Paul Nicholas's vet in the sitcom 'Close to Home' in 1989-90 and joined the second series of 'Trainer' in 1992 as Caroline Farrell, coping with her drinking and gambling husband played by Jeremy Sinden.

* in 1973, married the actor Christopher Cazenove with whom she had two sons, divorced in 1994 and had to cope with her eldest son dieing in a car accident in 1999.

*  gave up acting in order to concentrate on developing her own jewellery design business, describing this new career as "therapeutic" and saw some of her creations featured in the film 'Elizabeth: The Golden Age' in 2007.

* had a relationship with the actor, the late Alan Bates who had suffered the loss of his own son years earlier but turned down his proposals of marriage and eventually parted in 2002 and said in 2007 : "We were very close, but it was difficult because I had not yet given way to my grief over the loss of my son."

* was made an honorary fellow of the Royal Welsh College of Music and Drama and was appointed CBE in 2004 and the following year, married David McAlpine of the construction family.