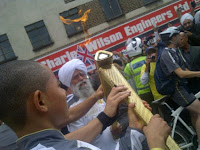 Fauja Singh is a remarkable man who was born in 1911 and is a British marathon runner of Punjabi Sikh origin whose record for the age '90-plus', is 5 hours 40 minutes which he ran at the age of 92 at the 2003 Toronto Waterfront Marathon.

Fauja has said : "I won't stop running until I die. The next target, God willing, is to be the oldest marathon runner ever" and "at the time when people start retiring, I thought of running at the age of 63."

Explaining his secret at running at 100 to BBC news :
http://www.youtube.com/watch?v=ZHiM4XuYUDk&feature=endscreen


He, drew the loudest cheers on Saturday as he carried the Olympic Torch accompanied by hundreds of admirers, including Sikhs with yellow T-shirts bearing his image, who hailed him every moment of the distance he travelled.
http://www.youtube.com/watch?v=UOLIkNrmJSc

"I run while talking to God."