An article in 'The Guardian' yesterday was entitled :


Suicide on the rise among older men 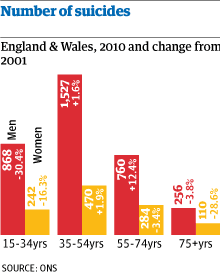 *  the number of suicides among men aged over 55 has risen by 12% over the past decade, while suicides by men aged under 34 dropped by 30%.

* the mental health charity, 'Calm' said men aged 45 to 54 were still most likely to seriously consider taking their own life and mental health experts are concerned that across all age ranges there are far more male than female suicides.

* Jane Powell, the Chief Executive of 'Calm', speculated that the recession may be having more of an impact on older men and said : "There is work to show that the impact of unemployment hits men harder, and later on in life; that it's easier for women whose lives are not necessarily defined by work and for whom part-time or temporary work isn't by definition bad."

* official statistics show that 4,517 people in England and Wales killed themselves in 2010, of whom 75% were men and Jane said there were two reasons for the imbalance : "First, because men are by default supposed to be in control, in charge at all times and so therefore needing help is by definition unmanly. And second because all too often men don't recognise what the problem is – they'll feel out of control, angry with everything, find that their life is out of focus, not be interested in what's happening around them – and they won't recognise that they are depressed. And because as a man they're supposed to be invulnerable, then suddenly the options they have of getting out of their situation start to look very slim."

* 'Calm', which began as a Department of Health initiative in 1997 and became a charity in 2006, has traditionally focused its efforts on reducing suicide among young men and is changing its remit to include the older generation.

* people in Manchester were more likely to kill themselves than in any other city and at a public meeting called by 'Manchester Users Network', a group for people with mental health issues, participants criticised cuts to services, in particular community centres, which act as lifelines to people with depression.