Victor Spinetti, Welsh-born actor of stage and screen, has died at the age of 82.

What you possibly didn't know about Victor, that he :

* was born in Cwm, Ebbw Vale in Wales over the chip shop owned by parents, Giuseppe and Lily, where he was born the eldest of six and had an Italian grandfather, said to have walked from Italy to Wales to work as a coal miner.
* was educated at Monmouth School and the Royal Welsh College of Music and Drama in Cardiff where he became a Fellow and met the actor Graham Curnow, who became his partner.
* sprang to international prominence in three Beatles films in the 1960s : 'A Hard Day's Night', 'Help' and 'Magical Mystery Tour' playing a wonderful, incomprehensible sergeant-major with Paul McCartney as the officer :
http://www.youtube.com/watch?v=KaBDBpzuYjo&feature=related

* had George Harrison say to him : "You've got to be in all our films ... if you're not in them me Mum won't come and see them — because she fancies you." and "You've got a lovely karma, Vic" and Paul McCartney said he was "the man who makes clouds disappear". 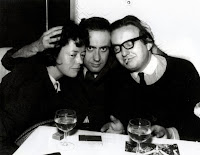 * worked in Joan Littlewood's 'Theatre Workshop' in 'Fings Ain't Wot They Used T'Be' in 1959 and 'Oh ! What a Lovely War' in 1963, which transferred to New York City and for which he won a Tony Award for his role as an obnoxious drill sergeant. 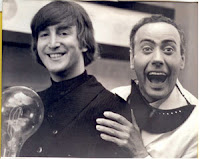 * co-authored 'In His Own Write', the play with John Lennon which he also directed at the National Theatre on my 21st birthday in 1968 and during a tv interview with John said : "it's not really John’s childhood, it's all of ours really, isn’t it John?" to which John replied, assuming a camp voice : "It is, we're all one Victor, we're all one aren't we. I mean 'what's going on?'"
http://www.youtube.com/watch?v=LmjvoXeP2Pg

* between 1969 and 1970, appeared on tv alongside the comedian Sid James in a sitcom about two office workers who jack it all in to become farmers.
http://www.youtube.com/watch?v=xat7vgCsXik

* during his long career, appeared in more than 31 films, many stage plays and 2008 at the age of 78, reprised his one-man sho as 'A Very Private Diary ... Revisited!,' in which he told his life story with a twinkle in his eye, recounting a tale of the great, the good and the not so good with revealing and hilarious stories of
Marlene Dietrich, Frank Sinatra, Princess Margaret, Elizabeth Taylor and Richard Burton, Sir John Gielgud, Laurence Olivier,Tallulah Bankhead (described as making Amy Winehouse look like Mother Theresa), Claudette Colbert, Jack Klugman, Ethel Merman, Sean Connery, Mary Martin, Peter Sellers and of course, The Beatles.

* had his poetry and prose, appear in various publications most notably :
WATCHERS ALONG THE MALL, 1963


Time has no place where it can Exist alone.
It needs us to mark it out And give it space in which to tick.
That which we call history Happen now, The past is waiting to be born And the future is already Burdened with age.
I know this, by our °lengeless barbarous ways; By the endless Spanish Inquisition Of greed and creed; By the next Holy War In which I shall surely die Fightiag the Saracens.
By a royal wedding Where feudal overlords and ladies Ride out and pass us by, And we are gratified That they have proudly shown Themselves to us As we polish our pikes And prepare for Agincourt.
Nowhere yet has man Rid himself of everything But the Fact Of his manhood, Thereby rendering unto himself The gift of timelessness.
He must always— (The pity of it)-- Always Measure out His
days and his fastidious nights And synchronise his watch With death each waking hour.
It is possible To stand outside time And cease to he Prehistoric, which we are, 'Or ' Electronically computed, which we are, But Just to be men and women, which we are, - And as such Truly eternal.

So Britain says "Bye, bye Victor and thanks for giving so much pleasure, to so many over so many years." 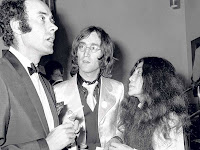