Rolling back 50 years: After countless hits (and even more wrinkles) the Stones mark 1962 debut

On wednesday, the four longest-serving members , Mick, Keith and ‘new boys’ Ronnie Wood and Charlie Watts, who have a combined age of 272, came together in public for the first time in four years and posed for a picture against a mock-up of the Marquee Club from its Sixties heyday. 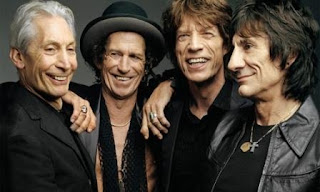 That hastily arranged performance so long ago featured only half the current line-up, namely Mick Jagger and Keith Richards who were joined on stage that night by the late Brian Jones, then calling himself Elmo Lewis, Dick Taylor on bass, Ian Stewart on piano and Tony Chapman on drums.

The 50th anniversary is being marked by a documentary and book launch, as well as a photographic exhibition at Somerset House in London and 'a tour' is also rumoured to be in the works.
http://www.youtube.com/watch?v=OEtIu2UtO7k&feature=related

So what about these old boys ? 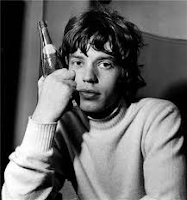 * made an unlikely rock star in his formative years, with his middle-class upbringing in Kent and his 'business studies' at the London School of Economics.

* a chance encounter with his old primary school friend. Keith, in 1960 rekindled his love of blues music and led to the formation of the Stones, however, the pair’s intense rivalry led to a decades-long feud.
* has been married twice – to models Bianca Pérez-Mora Macias and Jerry Hall – and has seven children and a personal fortune estimated at £190million.

Keith Richards is also 68 and : 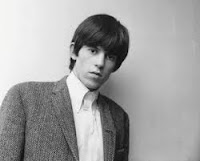 * was infamous for his heavy drug abuse and can perhaps be thankful he has survived into old age.

* has two daughters with his only wife, model Patti Hansen, who he married in 1983 and another three children with Anita Pallenberg and has a personal fortune is estimated at £175million.

Ronnie Wood is 65 and :
* joined the band in 1975 after playing guitar with Rod Stewart in 'The Jeff Beck Group' and 'Faces'.

* struggled for decades with drugs and alcohol but last year insisted he was clean.

* the drummer joined the band in 1963 has an estimated £85million fortune.

* has one daughter with his wife Shirley and mostly avoided the excesses of his bandmates and after a brief wild period in the 1980s, said: "I just stopped, it didn’t suit me at all."

* in 2004, was diagnosed with throat cancer and went into remission after radiotherapy.