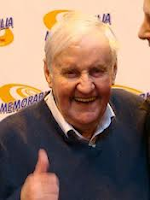 Richard, who first came to prominence as George Starling in the tv sitcom, 'Marriage Lines' when Britain's old men were young men in the 1960's and became a household name as Tom Good in 'The Good Life' in the 70s, has died at the age of 79 and was given a tribute by the BBC :
https://www.youtube.com/watch?v=qLjRdUgjYws

* was born in Raynes Park in Surrey where his mother who was a drama and music teacher, while his father drifted between jobs and he himself left school at 16 without any formal qualifications.

* got his first job in a clerical post with a cable manufacturer in London, went to evening class to qualify in electrical engineering, but left to became a filing clerk.

* in 1952, at the age of 18, was called up for two years National Service in the Royal Air Force and met future tv comedy actor, Brian Murphy (right), who introduced him to the Dramatic Society at the Borough Polytechnic Institute where he performed in several productions.

* left the RAF in 1954 and studied for two years at the Royal Academy of Dramatic Art in a class with future actor stars, Peter O'Toole and Albert Finney and then worked in repertory theatre in Liverpool and Coventry before his London West End debut in Duke of York's 1959 production of 'Gilt and Gingerbread'.

* made it to tv in 1961, in the sitcom, 'Marriage Lines' with Prunella Scales as his wife, which ran until 1966 but became nationally recognisable as Tom Good in 'The Good Life' ( left)from 1975–78, a draughtsman who decides, on his 40th birthday, to give up his job and try his hand at self-sufficiency, with the support of his wife Barbara, played by Felicity Kendal. 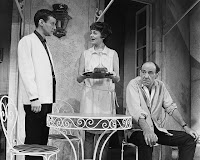 * had sucess in the theatre in 1967 playing alongside Michael Horden and Celia Johnson in the London production of Alan Ayckbourn's 'Relatively Speaking' (left) and returned to the theatre in the 1980s when Kenneth  Branagh offered him the role of Malvolio (right), in the Renaissance Theatre Company production of 'Twelth Night' and went on to play title parts in 'King Lear' and 'Uncle Vanya'.

* was a familiar voice actor on childrens tv with the animated series 'Roobarb' in 1974 and 'Noddy' in '75 and provided the voice of 'Fiver' in the animated film adaptation of 'Watership Down' in 1978.

*  was a keen visitor of Britain's historic churches and visited over one hundred for his 1988 book 'English Country Churches'.

* with news of his death the BBC referred to him as "one of Britain's best-loved actors" and Kenneth Branagh said : "He was a national treasure, a great actor and a wonderful man. He was greatly loved and he will be deeply missed."

"He was a wonderful mentor, tutor and teacher...He was always courteous  and would speak to the crew- which was not always that common...He was a real gent- bothgentle and a gentleman."