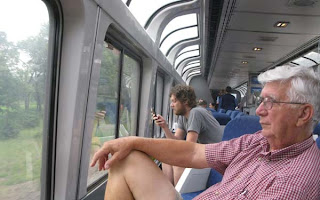 A King's Fund study has revealed that the attitudes of very old men of 70+ in Britain born before or during the Second World War and old men in their 60s who are the 'baby boomers' born after the War between 1945 and '64, differ considerably from those of their grandsons and sons, young men of 'Generation X' in their 30's and 40's born 1965-79 and 'Generation Y' born in the 1980s and 90s.


Take, for example, views on welfare and the question :
Should benefits for poor people should be increased, even if it leads to higher taxes ?
The table indicates clear differences between the old and young men.

Research suggests a more individualised view of rights and responsibilities among younger people in  Britain. Young men and women have received much less support in many areas of their lives and they have responded by expecting less. Older groups are net beneficiaries from welfare spending, but widespread support across cohorts can be maintained only if younger generations believe that a similar contract will remain in place when they are old. This seems likely to prove increasingly difficult, given that younger groups seem to have a much weaker perception of what they get out of it.

So old men of Britain who are baby boomers take heed :
As the levers of power slip from your grip and into the hands of younger men, you can expect to be the beneficiaries of harder, less charitable attitudes towards your welfare, particularly if you are destined to be poor old men.
Posted by ...............................JohnBoy at 09:58